Several leading policymakers - from ECB President Mario Draghi to EC President José Manual Barroso - have pushed Eurozone countries to adopt far-reaching structural reforms in labour and product markets in order to foster growth and employment. While there is a broad consensus that structural reforms enhance countries' growth potential in the long-run, recent research shows that they may have harmful effects in the short-run when not accompanied by substantial monetary stimulus. Consequently, a heated debate has started among economists and policymakers about whether now is the right time for the Eurozone to implement structural reforms. This column offers a brief summary of this debate.

Structural Reforms: The Road Back to Growth?

The limited capacity of Eurozone countries to implement fiscal stimulus has led several economists and policymakers to conclude that structural reforms are the only viable option in order to boost growth and lower unemployment. "Structural reforms" has come to be a catch-all phrase used to refer to growth-enhancing regulatory changes to labour and product markets. According to the OECD, labour market reforms include: (i) simplification of dismissal procedures, (ii) increased flexibility in working-time regulations, and (iii) enhancing firms' wage-setting flexibility. Examples of product market reforms consist of: (i) privatisation programmes of state-owned enterprises, (ii) stricter competition laws, and (iii) removing barriers to entry in professional services.

Several countries in the Eurozone, especially those located in the Southern periphery, are often singled-out for their poorly functioning labour and product market institutions (see Figure 1). At the same time, countries that have been particularly exposed to the Eurozone crisis are also those that have responded the most in terms of implementing structural reforms since the crisis began (see Figure 2). These reforms are intended to increase competitiveness in the short-run by reducing factor prices and facilitating "internal devaluation," while at the same time raising potential GDP growth in the long-run. Many commentators, including EU Commissioner for Economic and Monetary Affairs Olli Rehn, assert that this pattern of adjustment is exactly what is needed in order to reduce macroeconomic imbalances in the Eurozone: laggard countries that have historically maintained inefficient regulations are rapidly adopting new policy measures that will reduce unemployment and boost competitiveness. However, others - including Princeton professor and New York Times columnist Paul Krugman - argue that such policies are nothing more than a red herring distracting policymakers from the real underlying cause of the Eurozone's economic woes, namely the chronic shortfall of aggregate demand.

What do the Data Say?

But what about in the short-run? Should recourse to policies enhancing labour market flexibility and liberalising service industries be a priority in demand-constrained economies? Another cross-country study by the OECD (2012) indicates that structural reforms often take time to bear their fruits. In the absence of major macroeconomic disturbances, most of these reforms are beneficial, even in the short-run. However, this may not be the case for countries in the midst of severe conjunctural adjustments. The study shows that labour market reforms to unemployment benefits and job protection, in particular, tend to entail significant short-term costs in severely depressed economies. 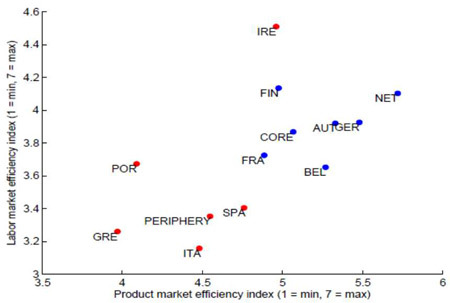 Reforming at the ZLB: Timing is Key

While it is still too early for there to be a rigorous empirical assessment of the macroeconomic effects of the ongoing structural reforms in Eurozone countries, recent theoretical work has found that such reforms can be a significant drag on output growth in the short-run when deflation risks are high. Using a standard New Keynesian business cycle model, Eggertsson et al (2013) find that, notwithstanding the unambiguous long-run benefits of pro-competitive policies, their short-run effects critically depend on the ability of the central bank to provide significant monetary stimulus. In particular, when monetary policy is constrained by the zero lower-bound (ZLB) on nominal interest rates, structural reforms that reduce labour and product market mark-ups will be contractionary as temporary shocks to productivity lowers inflation and increases the economy's real interest rate, thereby depressing demand even further.

Key to the argument put forth by Eggertsson et al (2013) is that structural reforms generate a contemporaneous drop in mark-ups charged by firms. But what happens if the pro-competitive effects of structural reforms only manifest themselves after a significant time lag? In a closely related paper, Fernandez-Villaverde et al (2012) show that if supply-side policies generate a future increase in productivity, rather than a temporary increase in productivity, then reducing mark-ups will actually increase output when the ZLB is binding. This occurs because productivity growth tomorrow generates a wealth effect that raises aggregate demand today. Theoretically speaking, the short-run output effects of structural reforms are therefore determined by the speed at which the implied productivity gains are transmitted through to prices. For example, a temporary reduction in the monopoly power granted to firms and unions can have a contractionary effect on output, as it would reinforce households' deflationary expectations and thereby lead to a further delay in consumption. 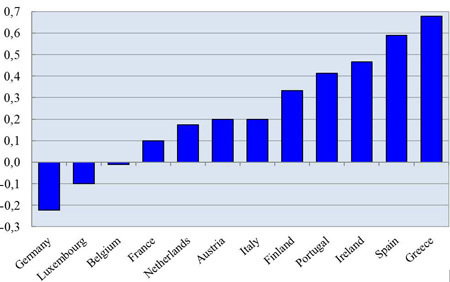 Another key factor stressed by Eggertsson et al (2013), over and above the timing of structural reforms, is their credibility. As discussed above, whether or not structural reforms generate significant short-run output losses fundamentally depends on how the reforms affect inflation dynamics, and by extension the real interest rate. Even if the monetary policy is constrained by the ZLB, future credible commitments to structural reforms can lead to significant boosts in output, even in the short-run, if it succeeds in lowering the economy's real rate of interest. Similarly, the short-run costs of structural reforms will be greatest when such reforms are not fully credible, so that firms and household expect them to be modified or altogether discarded in the future.

Taken together, these studies thus suggest that policymakers embarking on an ambitious programme of structural reforms during a recession should be aware that both the timing and credibility of these reforms matter, especially when monetary policy has lost (most of) its teeth and prices are falling.

Several leading policymakers – from ECB President Mario Draghi to EC President José Manual Barroso – have pushed Eurozone countries to adopt far-reaching structural reforms in labour and product markets in order to foster growth and employment. While there is a broad consensus that structural reforms enhance countries’ growth potential in the long-run, recent research shows that they may have harmful effects in the short-run when not accompanied by substantial monetary stimulus. Consequently, a heated debate has started among economists and policymakers about whether now is the right time for the Eurozone to implement structural reforms. This column offers a brief summary of this debate.