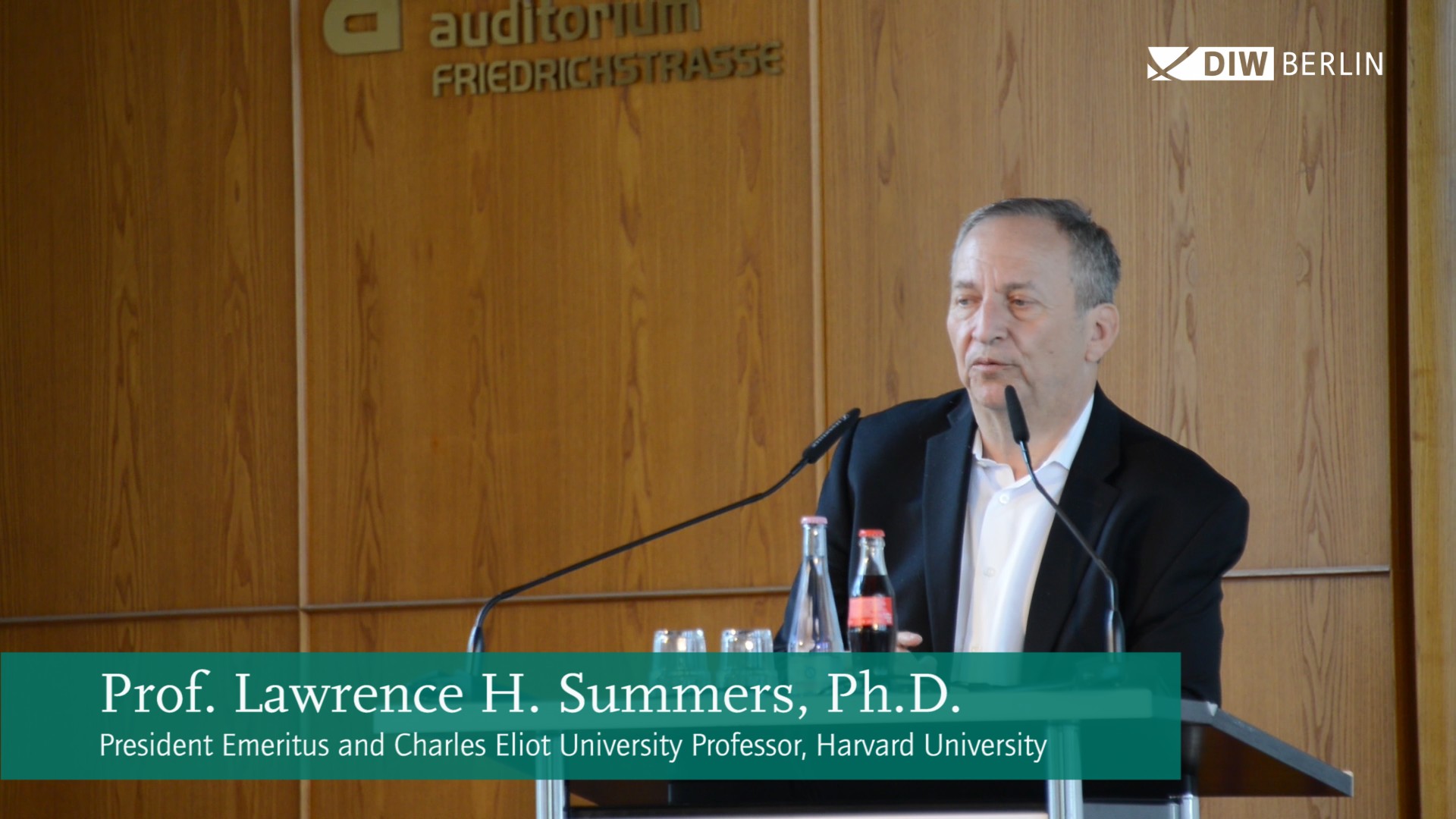 Prof. Summers discussed the theory of secular stagnation and it´s potential relevance to recent global economic events.  He argued that the industrialized world is likely to suffer from a structural surplus of savings over investment for quite some time and discussed a number of implications this presents. Prof. Summers focused, in particular, on Europe´s crucial role in the global economy and German´s crucial role in Europe.

Lawrence Summers, the 71st United States Secretary of Treasury and former president of Harvard University, is currently the Charles W. Eliot University Professor at Harvard University. He served as chief economist of the World Bank from 1991–1993 and as director of the National Economic Council for the Obama Administration from 2009–2011. One of the most influential international economists of the last thirty years, Summers’ foremost professional experience was with the global economic upheaval that came at the end of the Cold War, when he served as Deputy Secretary of Treasury and as the 71st Secretary of the US treasury, from 1995–2001, during the Clinton Administration. During this time, Summers worked on international finance and international development policy, including the privatization of the Russian economy after the Cold War, the Mexican currency crisis of 1994, and the Russian currency crisis of 1998. Domestically, he argued against taxation reduction, which eventually led to the use of budget surpluses to pay off the US national debt for the first time since the 1920s, and simultaneously extended the coverage and cycle of national social welfare programs. Summers’ tenure marked the longest period of sustained economic growth in United States history. Summers became the president of Harvard University in 2001, a position he held until 2006. There he spearheaded number of efforts, including equality of opportunity, major programs for stem-cell research and genomics, and efforts to renew Harvard College for undergraduates. Summers has made significant contributions to a host of international economic issues. In the 1990s, he secured the expansion of debt relief for the world’s poorest countries, thereby increasing those countries’ domestic financing of healthcare and education. Summers also developed the first National Anti-Money-Laundering Strategy and led international efforts to limit the abuses of tax and regulatory havens. He also played an important role in negotiating the United States’ agreement to allow China to join the World Trade Organization. Among his many accolades, Summers has received the John Bates Clark medal (1993), from the American Economic Association, and the Alan T. Waterman Award (1987), which is presented to an outstanding American economist under age forty.