Large-scale fiscal consolidations and the implementation of structural reforms should help southern European countries resolve the crisis. But recent studies indicate that in conjunction with the low interest rate in the euro area, the austerity measures that has been imposed could have the opposite effect, leading to an increase in sovereign debt and economic slowdown. For this reason, a more balanced policy mix consisting of less restrictive spending measures and more investment incentives is preferable to an austere savings policy.

Mário Centeno took over as the new Eurogroup president on January 13. Jeroen Dijsselbloem, the Dutchman who had held the office since 2013, handed the reins to the Portuguese economist and politician. With the finance ministers of the euro area member states, Dijsselbloem’s main task while in office was to handle the crisis in the southern European countries. Typically, the answer to increasing public debt alongside decreasing economic growth has been a mixture of austerity policy – a reduction in state expenditure or tax increases – and structural reforms. On January 22, Centeno will preside over his first meeting of finance ministers in Brussels. During his term of office a suitable reaction to the national and debt crisis will again be the major challenge. The group must also deal with a detailed analysis of the measures that have already been implemented.

The interest rate level, an important economic condition, is usually ignored when assessing the measures being taken. The European Central Bank (ECB) sharply lowered the short-term interest rate in order to counteract the economic downturn triggered by the financial and euro crisis. Currently, the deposit rate is even slightly negative. Recent studies indicate that in an environment of extremely low interest rates, fiscal savings measures and structural reforms have the opposite effect – at least in the short term – missing the actual consolidation targets. Therefore, austerity measures do not lead to a decrease in sovereign debt. Instead, they increase the burden of public debt. Structural reforms may slow down economic momentum instead of boosting economic growth.[1] In view of these findings, the recommended actions for crisis-stricken countries should be adjusted; something they themselves have been demanding for a long time.

Before we examine the interplay among fiscal consolidations, structural reforms, and the interest rate level, a look at the data is helpful. Figure 1 shows the development of fiscal austerity measures and GDP for Italy, Spain, Portugal, and Greece between 2007 and 2017. In 2008-2009, the global financial crisis led to a deep economic recession in all of these countries. In the wake of dwindling tax revenue and higher government spending in the form of aid packages or more social transfers, the public deficit rose and with it sovereign debt. In order to counter this imbalance in government finances, a troika consisting of the European Commission, the ECB, and the International Monetary Fund put pressure on those governments to drastically cut spending and implement structural reforms. They responded by raising tax rates, cutting spending, and implementing measures targeted at increasing productivity. The austerity measures in Greece, for example, turned a deficit of 12 percent into a slight surplus within two years. The other countries also had to subject themselves to similarly strict consolidation measures.

Despite the imposed austerity policy, the economy of these countries showed only minimal success. Between 2010 and 2013, the period of greatest austerity, the economy took another downturn. In Portugal, Italy, and Greece, GDP continued to be below its pre-crisis level in 2017. Unemployment is also a major issue: in Spain the rate is 17 percent and in Greece, an even higher 22 percent. Nor have the countries’ mountains of debt grown smaller. Measured by GDP, Portugal’s sovereign debt is 125 percent and in Greece, it is almost 180 percent. A reminder: According to the euro convergence criteria, the euro area member states are only permitted to have sovereign debt levels of up to 60 percent.

In addition to the developments in the euro states mentioned above, the ECB implemented expansive measures to support the euro area and protect the crisis countries from impending debt default. Could there be a relationship between the two developments? In other words, is there an interrelationship between low interest rates and lack of success of fiscal consolidations and structural reforms? 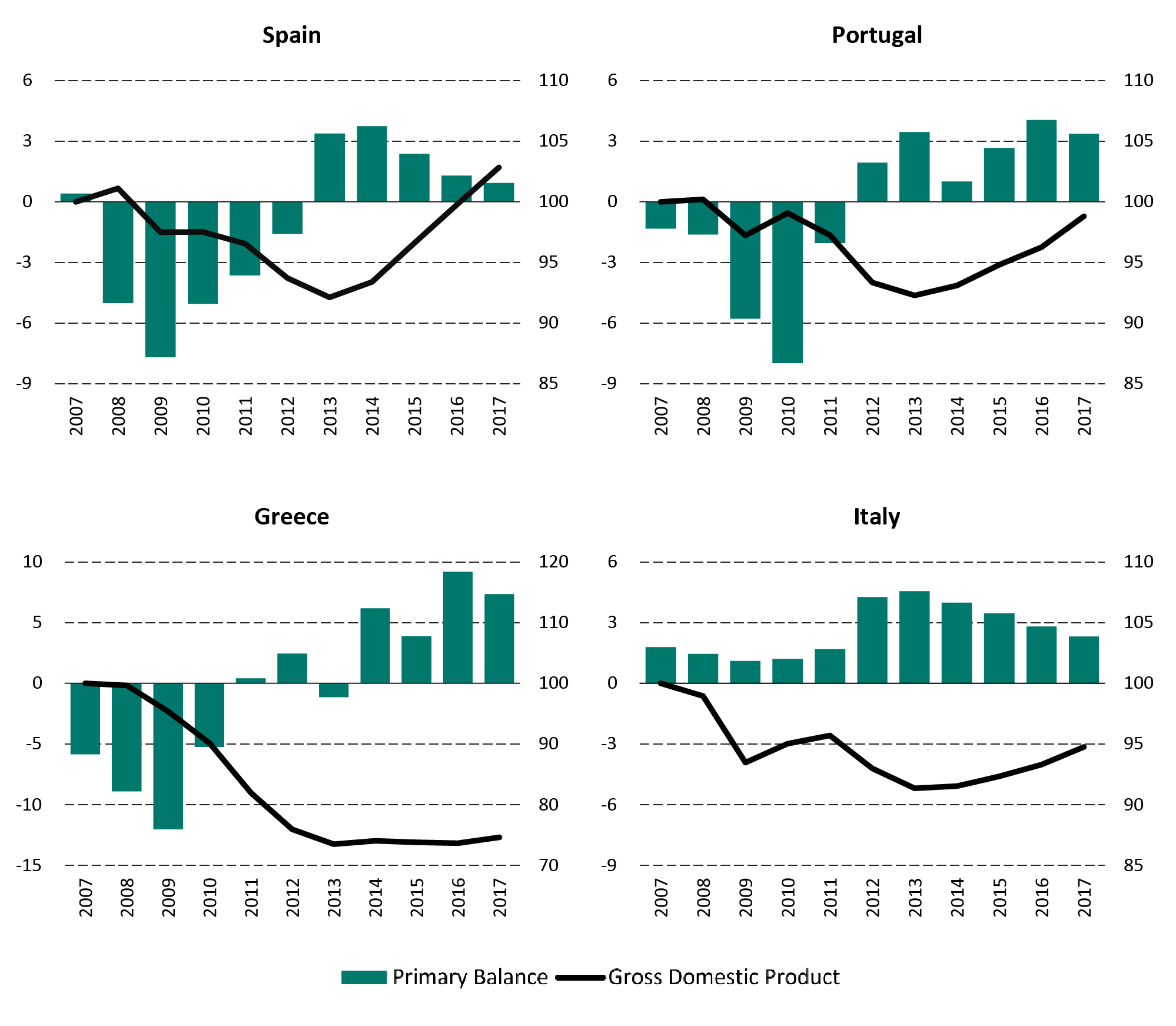 In order to better understand the interplay among monetary policy, fiscal consolidations, and structural reforms, for now we will assume a situation in which the central bank can freely adjust the interest rate not already pegged at zero. In such an environment, a reduction in public demand resulting from state spending cuts or an increase in the tax burden triggers a price decline. To pursue the goal of price stability and counter deflationary tendencies, central banks lower the interest rate, causing a rise in private investment demand.[2] An increase in the level of private demand therefore compensates for the drop in public demand. The macroeconomic consequences of consolidation measures are small, even slightly positive under certain conditions.

However, this logic no longer applies if central banks have already sharply lowered the interest rate, effectively tying their own hands, at least when it comes to the main control instrument. As illustrated in Figure 2, the prime interest rate has effectively been zero percent since 2009. It is no longer possible to lower the prime rate to compensate for the decline in public demand. The economies are feeling the full impact of falling prices, and as a result of the interest rate’s resistance to movement the real interest rate is rising. This trend is weakening private demand and investment is becoming less attractive to companies. The interplay between lower public and private demand triggers a downward spiral of decreasing economic activity, falling prices, and higher sovereign debt. In an environment of low interest rates, fiscal austerity measures therefore weaken economic development and have a negative effect on governments’ financial situation.

Figure 2: Deposit rate of the ECB
In percentage 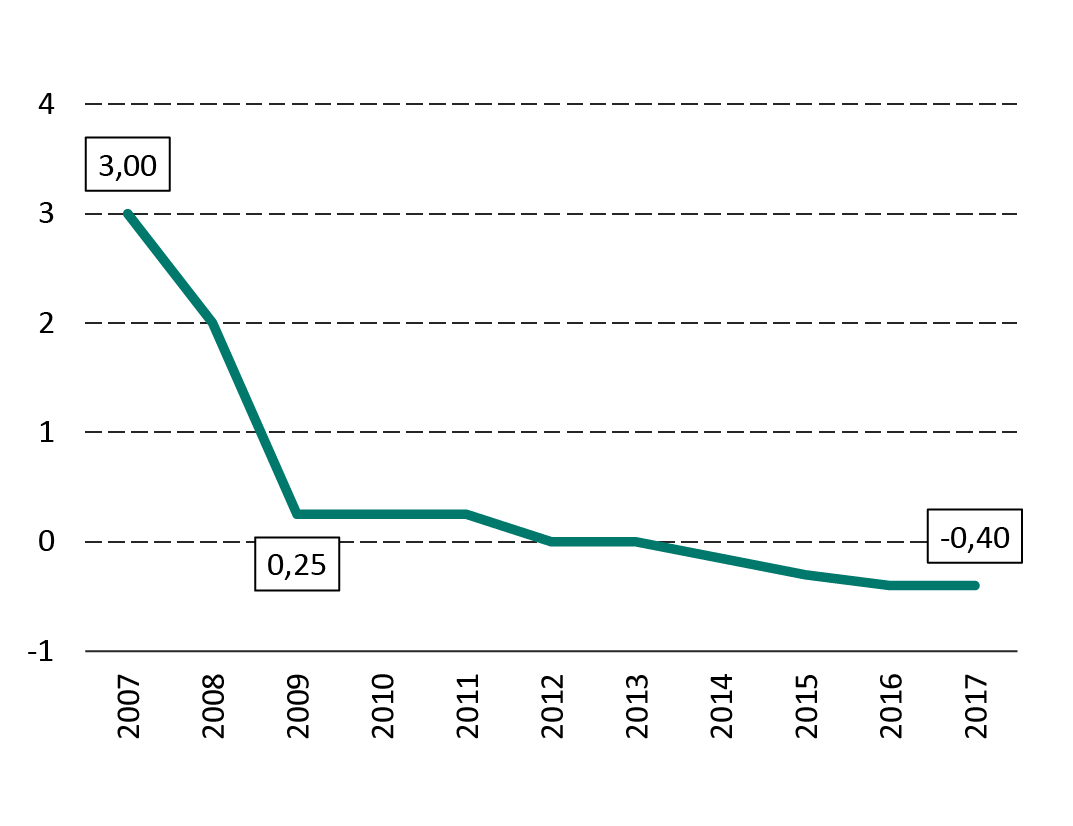 Alongside the low interest rate in the euro area, two further developments are likely to have reinforced the negative effects of fiscal consolidations and structural reforms. First, private households and companies have taken gargantuan measures to reduce their own debt burden. Sharply falling housing prices in the crisis countries reduced the value of their key securities, causing the real level of debt to rise. Households reacted by cutting consumer spending. And the flow of loans to companies was reduced to a trickle. In a situation in which private demand is already fragile, austerity measures amplify the economic downturn. Second, the euro crisis led to great caution in the European financial markets. Since the austerity measures have been minimally successful and sovereign debt has actually expanded, both the default risk of the countries involved and investor skepticism may have increased.[3]

Now the issue arises as to which measures should be taken in the future to reduce sovereign debt as a means of enlarging governments’ financial room for maneuver and increasing economic growth. Since it does not look like the ECB will raise the prime rate in the near future despite the growing momentum in the euro area’s economic development, the only remaining option is to adjust the consolidation targets. To avoid the enormously contractive and counteractive effects of stringent austerity measures, we recommend making them less restrictive, while at the same time dismantling the tax system’s superfluous bureaucracy and other elements that hamper growth. Debt relief as a means of enlarging governments’ financial room for maneuver should be considered in a tangible manner. And investment that favors long-term potential growth should be systematically supported. This balanced policy mix contains powerful measures with medium-term effects instead of short-term ones. In an environment of low interest rates, debt deleveraging in the private sector, and loss of trust in the financial markets, it seems apt to avoid the high costs of restrictive austerity programs.

[2] In the following, we assume a central bank and a common currency area.

Large-scale fiscal consolidations and the implementation of structural reforms should help southern European countries resolve the crisis. But recent studies indicate that in conjunction with the low interest rate in the euro area, the austerity measures that has been imposed could have the opposite effect, leading to an increase in sovereign debt and economic slowdown. For this reason, a more balanced policy mix consisting of less restrictive spending measures and more investment incentives is preferable to an austere savings policy.