The German economic upturn has gained both in terms of strength and breadth. In addition to consumer spending, external trade and investments are now also contributing to economic expansion. These are the conclusions drawn by the economic research institutes in their autumn report for the German federal government. Whereas the very high eco­nomic momentum in the first half of the current year will slow slightly, expansion of economic output this year and next will exceed production capacity growth. As a result, overall capacity utilization will increase, with economic output exceeding potential output. Gross Domestic Product is likely to grow by 1.9 percent this year and by 2 percent in 2018 (calendar-adjusted: 2.2 and 2.1 percent, respectively). 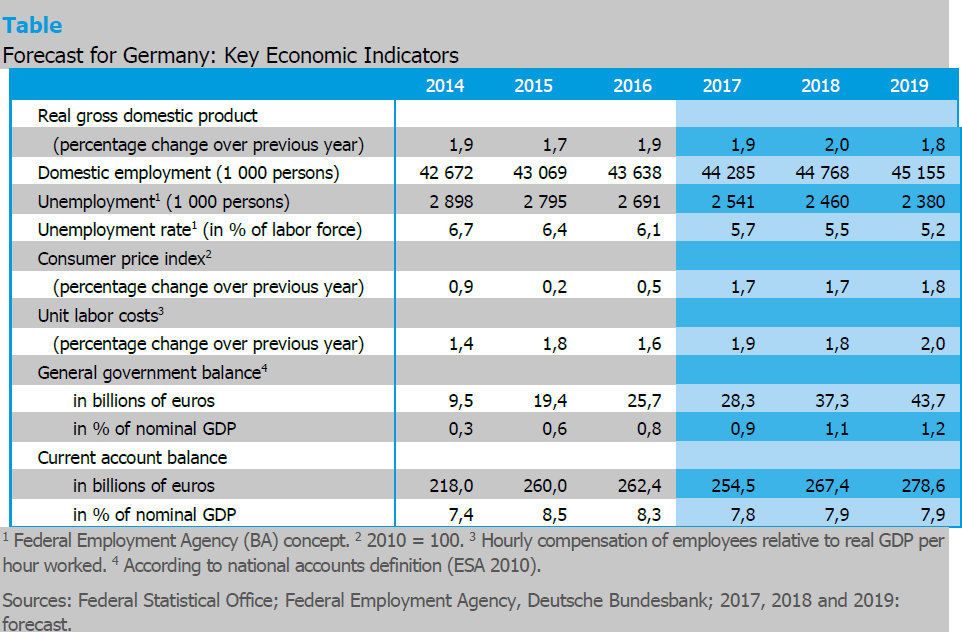 In the first half of the year the expansion rate accelerated substantially—the annual growth rate amounted to 2.5 percent. “Growth was driven by exports, which gained momentum in the first half of the year. Domestic demand, however, likewise remained a driving force behind the expansion, ,” said Stefan Kooths, Head of the Forecasting Center at the Kiel Institute for the World Economy. Private and public-sector investment expenditure grew significantly. Construction activity continued to be boosted by low interest rates and growing demand for residential housing. Equipment investments also expanded substantially and are likely to have been stimulated by the surge in external trade.

“As the economy has already headed in a robust upward direction for some time, initial signs of tension are discernible in a number of segments of the economy,” said Kooths. The number of vacancies reported on the labor market has increased considerably, and it is taking increasingly longer to fill a vacant job reported. In the construction sector in particular, more and more enterprises are indicating that a lack of available labour is impairing their output. Meanwhile prices are rising fairly sharply in this sector. Producer prices (excluding energy) have also seen a marked rise in the course of this year, while consumer price inflation has increased moderately.

For the second half of this year, the institutes expect further substantial economic expansion, albeit at a slightly lower rate in comparison with the first half-year. All in all, the institutes have forecast that Gross Domestic Product will rise by 1.9 percent in 2017; the 68 percent forecast interval in this context ranges from 1.7 to 2.1 percent. Adjusted for the number of working days, Gross Domestic Product will expand by 2.2 percent, the highest rate since the year 2010. Accordingly, the institutes have raised their spring forecast for the current year by 0.4 percentage points.

The upturn is likely to continue throughout the remaining forecast period. Meanwhile it rests on a considerably broader base than only a year ago. Investments are likewise making a sizeable contribution to economic expansion, and further robust impetus is discernible from abroad. For next year and the year after next, the institutes expect Gross Domestic Product to rise by 2 percent and 1.8 percent, respectively.

Investment activity is picking up noticeably, even if the expansion rates remain below those recorded in earlier boom cycles. As the level of capacity utilisation has become high, companies are likely to invest to a greater extent in expansion projects.

The dynamic pace of private consumer spending is likely to decline slightly, even though it still remains high in a long-term comparison. Dampening factors in this regard—unless policymakers take corrective action—include an increasing tax burden; another is the higher inflation rate. In contrast, gross wages are likely to grow at practically unchanged rates.

Exports are being stimulated by robust global economic growth, in particular by the ongoing upturn in the euro area; this will only partly be offset by the recent fairly strong appreciation of the euro, which reduces price competitiveness and therefore exerts a dampening effect.

The situation on the labor market will continue to improve. Employment continues to grow, albeit at a lower rate in the wake of slightly reduced production growth. In addition, owing to scarcities and bottlenecks in some segments of the labor market, capacity utilisation of existing personnel is likely to increase, which is also reflected by the fact that the working time per employed person is no longer declining. The number of employed persons is likely to grow by 1.1 percent in 2018 and by 0.9 percent in 2019, following an increase of 1.5 percent this year. However, measured unemployment will continue to decline to a lesser extent than the rate at which employment is rising. Causes of this include the increasing labor participation particularly by women and older persons and the continuing immigration. An additional factor is that the refugees who came to Germany in recent years are increasingly available on the labor market following the completion of their asylum procedures and qualification measures. The unemployment rate is forecast to decline from 5.7 percent this year to 5.5 percent in 2018 and to 5.2 percent in the year 2019.

Inflation is likely to only slightly accelerate in the forecast period. The institutes anticipate an increase in consumer prices by 1.7 percent in each of the current and the coming year, and by 1.8 percent in 2019.

Economic policy was hardly growth-oriented in nature during the last legislative period. It is worthy of emphasis, however, that the fiscal consolidation policy adopted in recent years actually succeeded in lowering public-sector debt in relation to economic output, which means that Germany today has a public sector that is able to take action based on a strong economy.

The general government budget surpluses likely to be unfolding for the forecast period, equivalent to ¾ percent of economic output, should be utilised in order to improve the economic conditions; in view of the high capacity utilisation in any case, there currently is no need for policy with short-term cyclical objectives in mind.

From the institutes’ perspective, more attention should be paid to the general government’s revenue side of the equation. In view of the high burdens imposed on labour incomes in the form of levies and a particularly sharp increase in direct tax revenues, the focus should be on the income tax rate curve. However, there is also scope for action in terms of social security contributions, which are also of particular significance to low-income workers, especially as regards unemployment insurance.

Corrections in the field of social security contributions are also necessary in view of the forthcoming demographic challenges. In particular, the situation regarding statutory pension insurance is likely to deteriorate to a marked degree in the medium to long term. So far, demographic change has not made itself felt all that clearly, but the process of ageing is already in full swing. “The German economy is currently undergoing an interim high in terms of potential growth rates, which will turn out considerably lower in the coming decade for demographic reasons,” said Kooths.