Boys consider themselves to be more gifted in mathematics than their grades indicate, whereas girls think their language skills are stronger. Differences in students’ self-evaluation of their skills are evident by the fifth grade and remain present throughout higher grades

Boys think higher of their math abilities in school than girls do – to an extent that is not justified by their actual grades. Research by the German Institute for Economic Research (DIW Berlin) shows that by the fifth grade, male and female students’ respective self-assessments of their math skills deviate from each other significantly. This difference remains present to a large extent up to and throughout the twelfth grade. These findings are the results of a study by Felix Weinhardt, a research associate in the Department of Education and Family at DIW Berlin, who evaluated data from the National Educational Panel Study (NEPS), which is representative for German students.

The results are especially relevant when it comes to the significant underrepresentation of women enrolled in STEM (science, technology, engineering, and mathematics) subjects at universities, technical colleges, and in formal training programs. “Women choose to study these subjects less frequently than men. They begin underestimating their math skills very early on in their schooling and develop preferences for other subjects, usually languages,” says Weinhardt. “Employers in STEM fields who are already complaining that they cannot find employees are possibly losing many talented women because of this.” 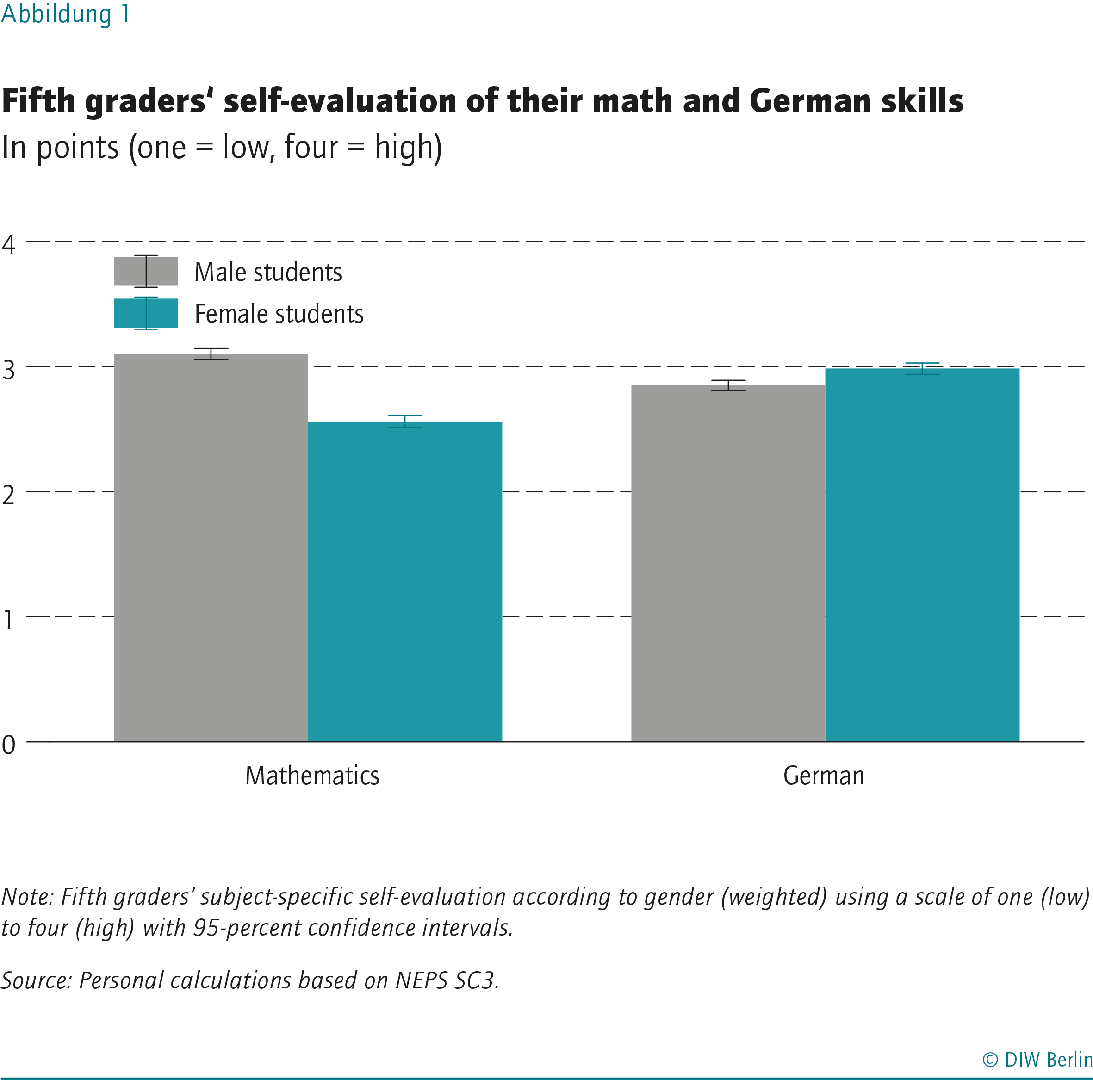 Starting in primary school, girls should be encouraged when assessing their math skills

Weinhardt uses data compiled from around 20,000 male and female students who responded to the statement “I have always been good in math” using a scale from one (“Strongly disagree”) to four (“Strongly agree”). Male fifth graders have an average response of 3.1, while female fifth graders have a significantly lower average of 2.5. Moreover, this difference can only be partially explained by boys actually having better grades in mathematics. When comparing male and female students with the exact same math grades, boys still rate their math skills about half a point higher than girls. This is already taking into account that boys generally, regardless of the subject, tend to rate their abilities higher than girls. Although female students have significantly better grades than male students, male and female students’ self-assessments of their language (German) skills are almost identical.

Since boys and girls perceive their abilities very differently from a young age, possibly as a result of social role models, it is vital, according to Weinhardt, to counteract this problem early, too. “Teachers and parents should be doing a lot more to convince girls of their existing math skills – starting in primary school, not in high school,” recommends Weinhardt. Boys could also receive extra support in languages (German) to reduce comparison effects, such that boys believing that they are rather talented in mathematics compared to their bad language skills, especially in comparison to girls. Some female students, on the other hand, might believe that they are more gifted in languages than mathematics based on their relatively better achievements in German, and despite not actually being much worse at all in mathematics.

Research Associate in the Education and Family Department