A normal retirement age that increases relative to the rise in life expectancy after 2030 could help keep the funding of the statutory pension insurance scheme stable without the pension level decreasing further. Depending on the scenario, a partial retirement scheme could also relieve retirement funds and raise employment rates. These are the most important results from two DIW studies on the topic of retirement.

The demographic change is causing a steady reduction in the number of employed persons while simultaneously increasing the number of pensioners. In order to prevent the number of pension contributors from rapidly sinking and allow for sufficient retirement incomes, innovative concepts are needed that encourage people to retire from the labor force later in life. 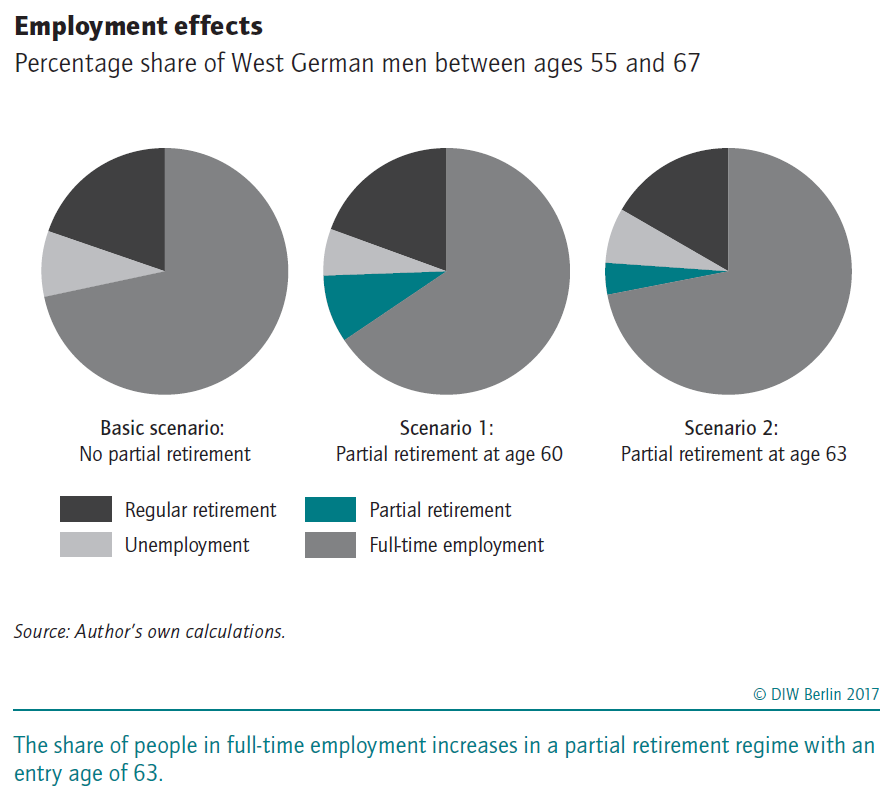 A higher age limit for affordable and adequate pensions

Raising the normal retirement age in relation to a rising life expectancy not only contributes to the consolidation of the pension fund, but also increases retirement incomes. “The simulations show that with retirement at age 68, the net relative pension level increases by about 0.6 percentage points and the contribution rates nevertheless fall by as much as 0.4 percentage points,” says DIW Berlin economist Hermann Buslei. The individual pension entitlement increases over the entire duration of the pension payout due to having worked for a longer period of time. This partially compensates for the decline in pension benefits compared to wages caused by the demographic factor in the pension formula.

The current increase in the normal retirement age from 65 to 67 began in 2012 and will be completed in 2031. Since life expectancy is expected to continue to increase thereafter, a further increase in the normal retirement age could ensure that the ratio of pensioners to workers remains constant. Buslei's calculations, based on a population projection from the Federal Statistical Office (Statistisches Bundesamt, Destatis), show that the relative length of the pension payout - the duration of the pension payout in relation to the contribution period - significantly increases starting in 2031 at the current retirement age of 67. If life expectancy rises by an estimated three years by 2060, for example, then the retirement age would have to be increased by two years to 69 over the same period in order to maintain the relative pension levels from 2030. The following graphic illustrates this effect: 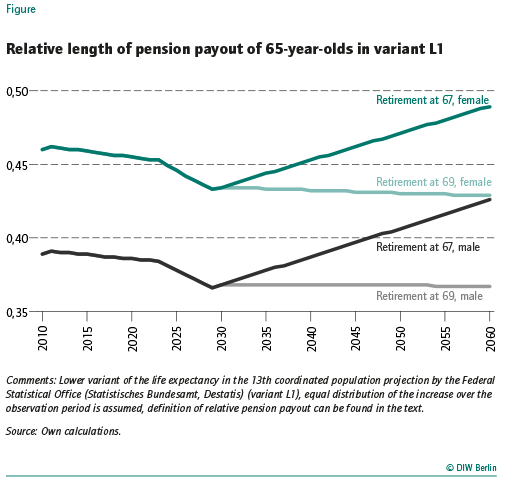 According to previous experiences, with an increase in the normal retirement age comes an increase in the average age when entering retirement and thus also the employment rate, which in turn increases the pension fund's incomes. Buslei expects there to be approximately 400,000 additional gainfully employed persons in 2045 when the retirement age is 68. For people who cannot work until the statutory age limit of 68 or 69, special arrangements could be made which also take into account different life expectancies of the occupational groups.