The introduction of the minimum wage in Germany led to significant increases in wages –– However, around seven percent of eligible workers earn less than minimum wage, with the marginally employed and employees at small businesses being particularly affected –– When one also takes into account workers who are not eligible for a minimum wage, such as freelancers, a total of around 4.4 million people in Germany earned less than 8.50 euros gross per hour in 2016 –– Inspection and sanctions mechanisms need to be improved as do methods for recording work hours

A new study from the German Institute for Economic Research (DIW Berlin) and the University of Potsdam shows that while the introduction of a minimum wage has led to a significant increase in low wages, not every worker who has the right to a minimum wage is being compensated accordingly.

Wage data from the Socio-Economic Panel

The Socio-Economic Panel (SOEP) is the largest and longest-running multi-disciplinary long-term study in Germany. It is a part of the research infrastructure in Germany at DIW Berlin and is funded under the umbrella of the Leibniz Association (Leibniz-Gemeinschaft, WGL) by the Federal Ministry of Education and Research (Bundesministerium für Bildung und Forschung, BMBF) and the federal states. The polling agency Kantar Public has been surveying several thousand people on behalf of the SOEP every year since 1984. Currently, there are around 30,000 respondents in approximately 15,000 households. The data from the SOEP survey provides information about personality traits, education, health, income, employment, and life satisfaction. Since the same people are surveyed every year, long-term societal trends as well as group-specific life developments can be particularly well analyzed.

The SOEP does not collect specific information on hourly wages, but rather on monthly wages and weekly work hours, both contractual and actual. This results in the numbers presented here.

The study also included the results of a representative survey commissioned by SOEP, which was conducted among 2,000 people in June / July 2015, June / July 2016, and August / September 2017. The participants were surveyed regarding their opinions on and experiences with the minimum wage.

Based on information provided by workers about their monthly wages and work hours within the long-term study Socio-Economic Panel (SOEP), the authors of this report calculated that in 2016, 1.8 million people who were eligible for the minimum wage were actually earning less than 8.50 euros gross per hour –the minimum wage at the time – based on their contractual work hours. This figure has dropped by a million since 2014, before the minimum wage was introduced, but is still equivalent to seven percent of all eligible employees. This estimate is significantly higher than the official numbers which are based on information from employers (approximately 1.1 million in 2016).

If the employees’ actual hourly wages, which are calculated by using the actual work time instead of the contractual work time, are taken into account, the number of those being paid less than minimum wage rises from 1.8 to 2.6 million people in 2016, according to SOEP data. However, this number does not automatically indicate how many workers were unjustifiably earning less than minimum wage, as there are workers who voluntarily work unpaid overtime – a phenomenon that plays a role along the entire wage scale.

To many workers, the laws regarding the minimum wage do not apply. This is the case for freelancers, trainees, and employees in industries that arranged longer transition periods. With this group also included, a total of 4.4 million workers earned less than 8.50 euros per hour based on their contractual work hours in 2016, while 6.7 million earned less based on their actual work hours, proving the existence of a large low-income sector. 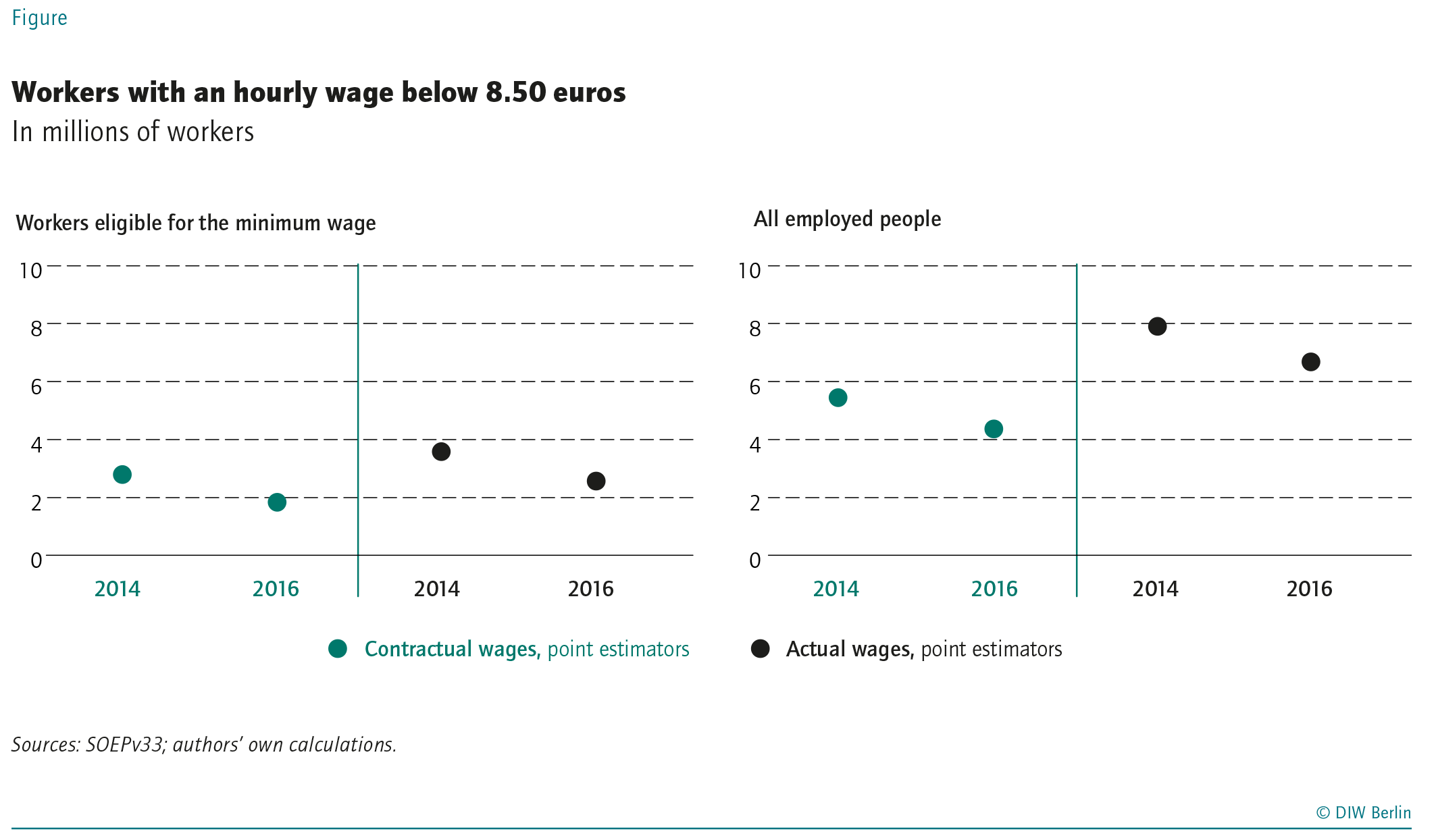 Minimum wage regulation is circumvented in many cases

“Obviously – and not at all unexpectedly – the minimum wage law is not being implemented on a one-to-one basis in every company,” comments Alexandra Fedorets, an author of the study. “Customs inspections results and countless media reports point to circumvention strategies through nontransparent or unofficial work time arrangements."

In a separate survey on behalf of SOEP in August / September 2017, around four percent of the respondents indicated they were personally affected by their employer's attempts to avoid paying minimum wage. A further 17 percent indicated that they knew someone who was affected by such attempts.

“It is noticeable that some groups of wage earners who are compensated below the minimum wage are particularly affected, such as the marginally employed, employees in small companies, and foreign nationals. Women are also more affected than men, and workers in the east more than workers in the west,” says Marco Caliendo, professor at the University of Potsdam and co-author of the study. Based on their actual work time, 13 percent of all eligible women earn less than what they should, twice as many as men (six percent). Forty-three percent of marginally employed workers are not paid enough. In eastern Germany, this is 15 percent of all eligible employees (nine percent in western Germany).

Although some eligible employees are still not earning enough after the introduction of the minimum wage, its introduction in 2015 led to strong wage increases in the lower wage bracket. In the lowest wage decile, the ten percent of employees earning the least, wages rose by 15 percent between 2014 and 2016. Before 2014, the two-year wage growth rate for these workers was around two percent.

“One of the goals of introducing the minimum wage has been achieved: low wages have been boosted significantly,” says Fedorets. “Now everything must be done to ensure that everyone who has the legal right to a minimum wage is paid accordingly.”

The study authors see both a need for political action and a considerable need for improvement in documentation and investigation and sanctions mechanisms – contrary to the demands of employers' associations, which argue for a relaxation of documentation requirements and investigations. Currently, customs inspections are not comprehensive; rather, they are performed in a risk-based manner, meaning they are performed where systematic violations are expected. Stricter requirements when it comes to recording work hours might also increase the efficiency of the inspections.