More and more children in Germany are attending day care centers. In 2016, almost 33 percent of children under the age of three and around 94 percent of all children aged three to six were attending a day care center. The quality of a center and composition of groups there play an important role in children's behavioral and linguistic development. However, a new study from the German Institute for Economic Research (DIW Berlin) shows that children whose home language isn't German often attend a day care center with peers who also do not speak German with their families at home.

In 2016, over 45 percent of children with German as their home language attended a facility where less than ten percent of their peers were from non-German-speaking families. In contrast, around one-third of children who do not speak German at home are in a facility where over 50 percent of the children attending are in a similar situation. These are the results of an analysis of a comprehensive dataset from western Germany (including Berlin) covering the years 2007 to 2016. The federal states in eastern Germany were not included due to the low percentage of children in day care centers there who do not speak German at home (around four percent); with such a small number, no reliable conclusions can be drawn. 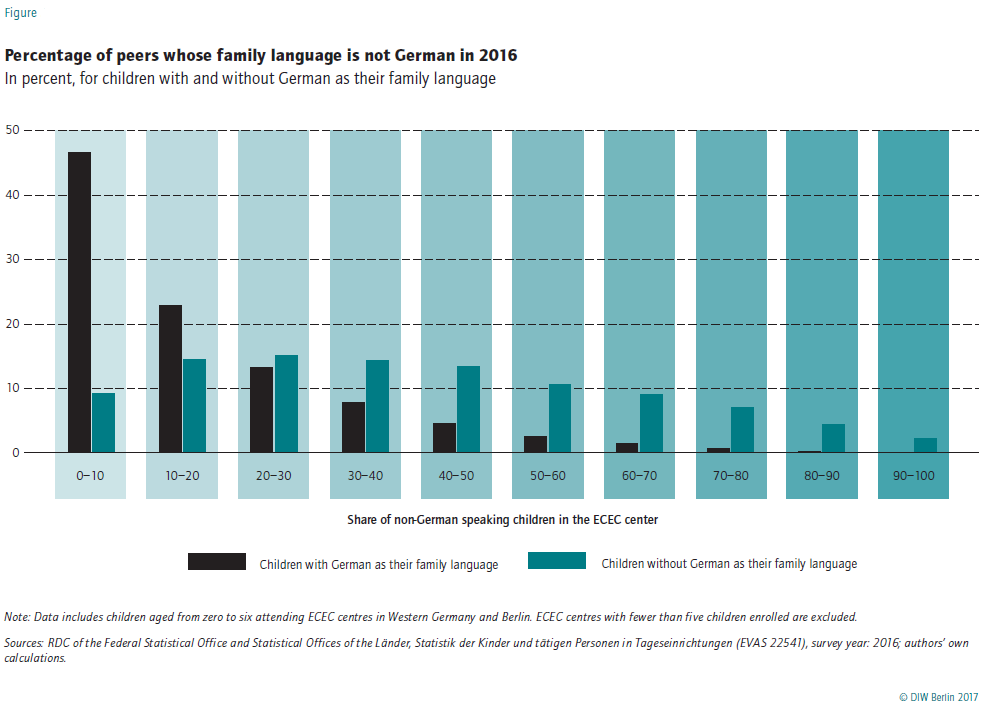 "Not very conducive to integration"

"It is crucial that children who speak and hear a language other than German at home can interact with German-speaking children in the years before school entry," says study author Ludovica Gambaro. "Unfortunately, we have found that a fairly high level of segregation prevails in Germany: these children often attend day care facilities where the majority of the other children also speak another language than German at home. This can be an obstacle to learning the German language and integrating into German society."

The concentration of children from non-German-speaking families in German day care centers has remained almost constant over the last ten years. However, policies can influence the composition of  day care groups with targeted measures and regulations. "Regulations that offer financial incentives to facilities once they have a minimum percentage of children from non-German-speaking families are not particularly helpful. Such regulations can motivate centers to reach this percentage and thus actually foster segregation," says Gambaro. "A better method for achieving integration would be to offer goal-oriented financial support for each individual child who grows up in a non-German-speaking household."

Aside from the composition of groups, which is an important quality criterion, other aspects of quality at day care facilities are also important for children's development, according to a second study from DIW Berlin. Study authors Georg Camehl and Frauke Peter examined the connection between the qualities of the centers – with the quality level based on five indicators: the size of the groups, staff ratio, educators' level of education, available play and learning materials, and number of group activities – and the children's prosocial behavior. Prosocial behavior describes how considerate children are with each other, how they share with one another, or how kind they are to younger children. These qualities are relevant for the children's later work lives, as they are closely related to the abilities needed to, for example, work in a team.

The analysis of data on four and five-year-olds from almost 200 Kitas shows that quality of day care centers has a positive correlation with children's prosocial behavior. In particular, the availability of play and learning materials and group activities promote prosocial behavior. This is particularly true for children from disadvantaged households, measured in terms of household income and the mother's educational attainment.

"We have again shown how important the quality of day care facilities is for early childhood development. Moreover, high-quality Kitas can somewhat compensate for differences in origin, and that is an important quality when it comes to giving disadvantaged children more educational opportunities," says study co-author Georg Camehl.

"Luckily, the public and political debate regarding childcare in Germany is finally now focused on quality after many years of primarily discussing quantity," says the study’s other author, Frauke Peter. "Now we need to convert this focus into concrete steps, such as establishing minimum quality requirements that apply to Kitas country-wide.