The construction sector cycle will continue its upward course in the next two years according to the forecast of the German Institute for Economic Research (DIW Berlin), which makes its annual prognosis of construction volume on behalf of the Federal Ministry for the Environment (Bundesbauministerium, BMUB) and the Federal Institute for Research on Building, Urban Affairs and Spatial Development (Bundesinstitut für Bau-, Stadt- und Raumforschung, BBSR). However, investment will concentrate more on renovation and modernization, swinging away from new construction. Commercial and public-sector construction activity is expected to continue its moderate pace of increase.

The price of construction services will rise sharply as overall capacity utilization in this sector is close to maximum. Accordingly, cost increases in wages, energy, raw materials, and property should have a major impact. The nominal rate of increase in the construction volume to 392 billion euros in 2018 and 414 billion euros in 2019 will therefore translate into significantly weaker real rates of increase. They should be 1.8 percent in 2018 and 2.4 percent in 2019. With real rates of increase of 3.5 percent this year and a further three percent in 2019, the housing construction sector should further serve as the foundation of Germany’s growth. Public construction will have negative growth (-1.6 percent) this year and with a level of 0.6 percent, recover only slightly in 2019. Commercial construction will grow slightly in 2018 (0.2 percent), but at two percent in 2019 it should make a visible contribution to growth in the sector.

In view of the consistently high level of demand in the urban housing market, policy makers should focus on incentives for creating additional living space on developed property alongside developing undeveloped land. “Adding storeys to buildings, building behind existing homes, and building on undeveloped lots are measures that harbor great potential for creating living space where demand is high. With an investment subsidy for urban development, policy makers could activate additional investors,” said Michelsen. “This funding could be used in urban development districts, systematically supporting the construction of urgently needed living space,” added Gornig. Blanket funds, on the other hand, would probably be lost to rising prices in the current phase of the economic cycle.

The slowdown in new construction will leave more room for renovating and modernizing existing residential buildings. Despite the lively trade in resale property in recent years, this sector has experienced slow growth. “Typically, when a building is sold its structural fabric is modernized. Measured by the transaction volume in the residential market in recent years, there is pent-up demand for renovation here,” said Gornig. Therefore, Michelsen and Gornig expect a shift in construction investment from new housing to modernization. After growth of around 4.7 percent in 2017 in the renovation and modernization of housing stock, DIW expects a plus of six percent this year and an increase to 7.5 percent in 2019. Energy upgrades should also provide more stimulus for this sector again.

In commercial and public-sector construction, development in recent years has been much slower than that of residential construction. The federal government has indeed provided considerably more funding for construction investment, of which the municipal level, however, is responsible for over 80 percent. Commercial companies have been relatively inactive when it comes to construction. Additional demand in this segment is likely to come from factory and workshop buildings. Given this information, DIW Berlin anticipates weak growth if any in commercial construction for 2018 and growth of two percent in 2019. Public-sector construction is expected to decline by 1.5 percent in real terms in 2018 and plateau at that level in 2019. 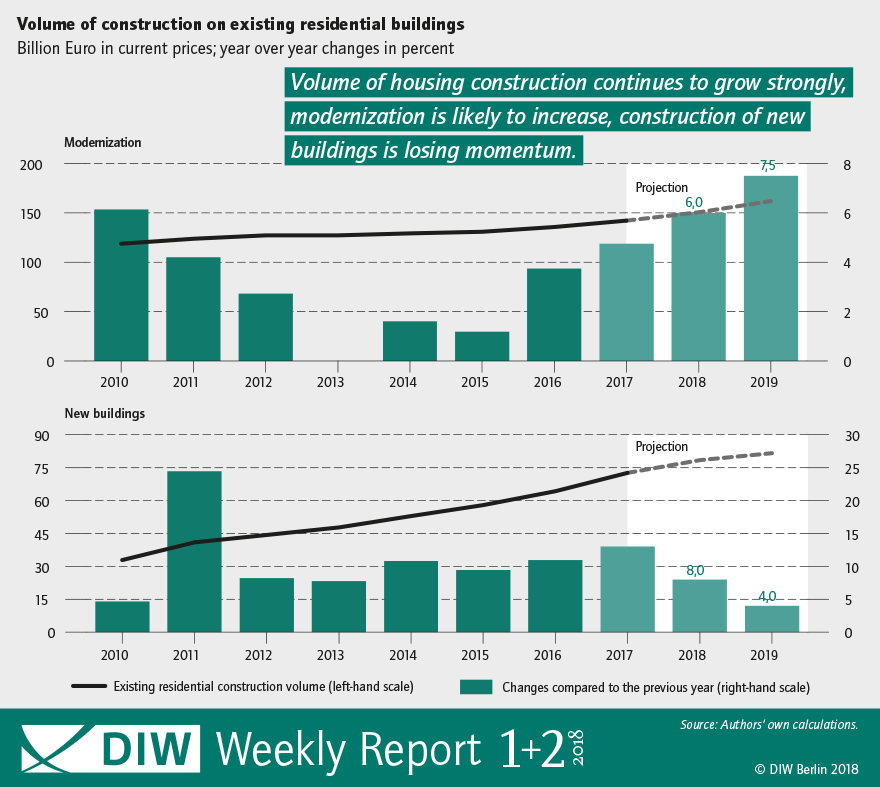