The 30 percent gender quota for supervisory boards is effective: the proportion of women on the supervisory boards of a good 100 companies in Germany which have been subject to the quota since 2016 increased to an average of 30 percent by the end of 2017, almost three percentage points more than the previous year. The German Institute for Economic Research's (DIW Berlin) Women Executives Barometer shows for the first time that numerous companies are increasing the proportion of female members serving on their supervisory board beyond the specified minimum. 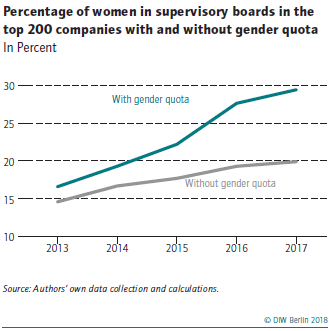 "Two years after the gender quota for supervisory boards was introduced, we can see a relatively clear picture: it's effective, as it is in other European countries as well," said Elke Holst, research director for Gender Studies at DIW Berlin. Together with Katharina Wrohlich, Holst collected and evaluated data on over 500 companies in Germany. "However, the truth is that without pressure and the threat of sanctions, nothing will change, as the development of the proportion of women on executive boards shows."

In order to bring more women to executive boards and keep them there, companies should quickly build and expand their pool of potential female candidates, according to Holst: "Otherwise, it's up to politicians to think about tightening the existing voluntary rules for women on executive boards and in leadership positions, if necessary." It's not about a conflict between politicians and businesses, but rather a joint effort between the two.

On the one hand, politicians are needed in order to improve basic conditions. "This includes such things as qualitatively and quantitatively expanding daycare services and evening out the division of childcare and unpaid household labor between partners. This can be achieved by expanding paternity leave, for example," said Wrohlich. On the other hand, businesses also need to do their part to improve the situation, such as by giving their employees more time sovereignty in the rush hour of their lives, the phase between 25 and 45 when major life events coincide, such as starting a family, establishing a career, and caring for aging parents. Digitalization offers numerous opportunities to support this change.

Banks and insurance companies in particular, industries where women make up over half of the total employees, still need to catch up: while the proportion of women on executive and supervisory boards of the 100 largest banks in Germany rose last year slightly to almost nine and almost 23 percent, respectively, the proportion working for the 60 largest insurance companies decreased to a good nine and almost 22 percent, respectively. Since most companies in the financial sector are not continuing to increase the proportion of women on their supervisory boards once they have reached the 30 percent mark, it seems too optimistic to expect the development over the past few years to continue linearly. Even if it did continue linearly, it would take about 40 years for banks and 28 years for insurance companies to reach equal gender representation on their decision-making bodies. It would take even longer for equality to be reached on executive boards: about 70 years.