Germany needs to reform its passenger car and fuel taxation and make a gradual increase in the diesel tax a priority. This is the conclusion reached by Uwe Kunert, a transport economist at the German Institute for Economic Research (DIW Berlin) who systematically analyzed and compared passenger car tax systems for 30 European countries (EU-28, Norway, and Switzerland) in a new study. “The comparison shows tax systems which vary greatly in their design, use many different assessment bases, and, as a result, have quite different tax burdens,” said Kunert. The total sum of taxes and duties paid when purchasing (value-added tax, registration tax and fees), maintaining (motor vehicle tax, insurance tax), and using (taxes on fuel) a new mid-size car with an annual mileage of 15,000 kilometers is between 1,200 and 2,000 euros for most of the countries surveyed. In countries with even higher tax totals, the registration tax—which does not exist in Germany—is the determining factor. Moreover, the sample calculation shows that in 26 countries, vehicles with a diesel engine have a lighter tax burden than those with a gasoline engine.

Only the Eastern European EU countries, the Baltic countries, Switzerland, and Luxembourg levy lower taxes on passenger car ownership and use than Germany. If the purchasing power parities are taken into consideration, Germany is at the lower end of the countries together with Luxembourg and Switzerland. 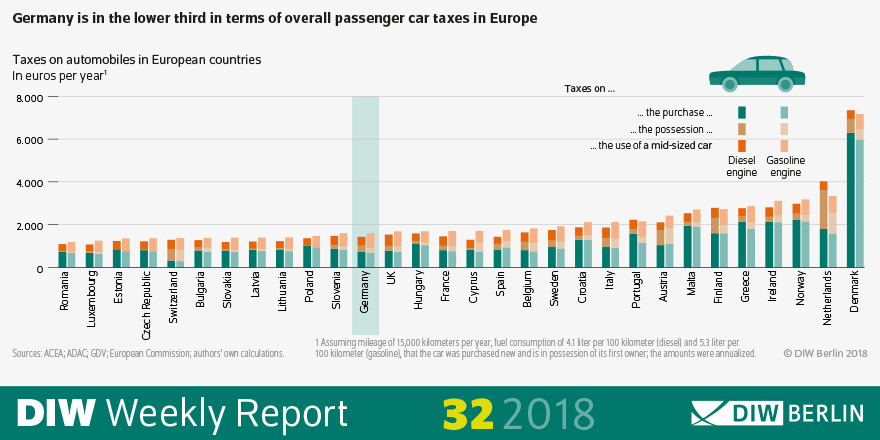 “At least in terms of taxes, owning and using a car in Germany is significantly less expensive than in most neighboring countries,” said Kunert. “Yet the taxes are neither generating enough revenue for the state nor creating strong enough incentives for using less polluting technology, as CO2 emissions in the transport sector are rising and air quality—especially in cities—is insufficient. The tax system is in urgent need of reform.”

Energy tax and motor vehicle tax in need of reform

Priority in this reform should be a gradual harmonization of the diesel tax rate with that of gasoline, according to Kunert. In Germany, as in most European countries, diesel-powered technology is strongly favored with a lower rate of energy tax per liter of fuel consumed (47 cents for diesel and 65.5 cents for gasoline). This has helped diesel engines reach considerable market shares on the European market.

In a further step towards reform, both tax rates should be raised. The energy tax levied on every liter of fuel consumed has not been raised since 2003. By contrast, the majority of the countries surveyed have raised their tax rates for gasoline and for diesel since 2009. The tax authorities should offset the additional revenue from this by, for example, reducing other taxes that do not take environmental consumption into account.

Another aspect of reform involves changing the assessment bases for the motor vehicle tax. The amount of registered passenger cars has risen by about 13 percent since 2008. However, revenue from the motor vehicle tax is stagnating because it is based on cylinder capacity and official data on CO2 emissions, both of which are decreasing. Moreover, the official data on emissions are much lower than the quantities actually emitted.

“The bases for the motor vehicle tax are decreasing, and the revenue of the tax in no way reflects the fact that more and more cars are on German roads. Instead, weight or engine power would be more suitable as alternative assessment bases,” said Kunert. ”Both variables are objectively measurable, related to environmental aspects, and continually increasing.”