Germany’s leading economics research institutes have downwardly revised their forecasts for 2018 and 2019. They now expect economic output to increase by 1.7 percent in 2018, and not 2.2 percent as forecast in spring. They also scaled back their 2019 forecast slightly from 2.0 to 1.9 percent. These are the results of the Joint Economic Forecast for autumn 2018 that will be presented in Berlin on Thursday.

“The upturn in the German economy is losing momentum. Demand from abroad has weakened, and companies are apparently suffering from labour shortages in production too,” explains Roland Döhrn, Head of Economic Forecasting at RWI – Leibniz Institute for Economic Research, which coordinated this autumn’s report. Commenting on the German government’s economic policy, he added: “Short-term initiatives like the family home-owner allowance tend to lead to windfall effects and rising costs because capacity utilisation in the construction industry is already high. In the current economic climate we need a housing policy that is geared more towards continuity.”

The institutes expect significant fiscal surpluses over the entire forecasting horizon. The surplus will hit a new record high of 54 billion euros this year. By 2020 the fiscal balance will melt down to 41 billion euros due to the government’s expansionary fiscal policy stance.

The risks for the German and international economic have grown since spring. At a global level this is mainly due to the rising number of trade conflicts, while the main risks at a European level are the possibility of Britain’s disorderly exit from the EU and the potential outbreak of a debt crisis in Italy. 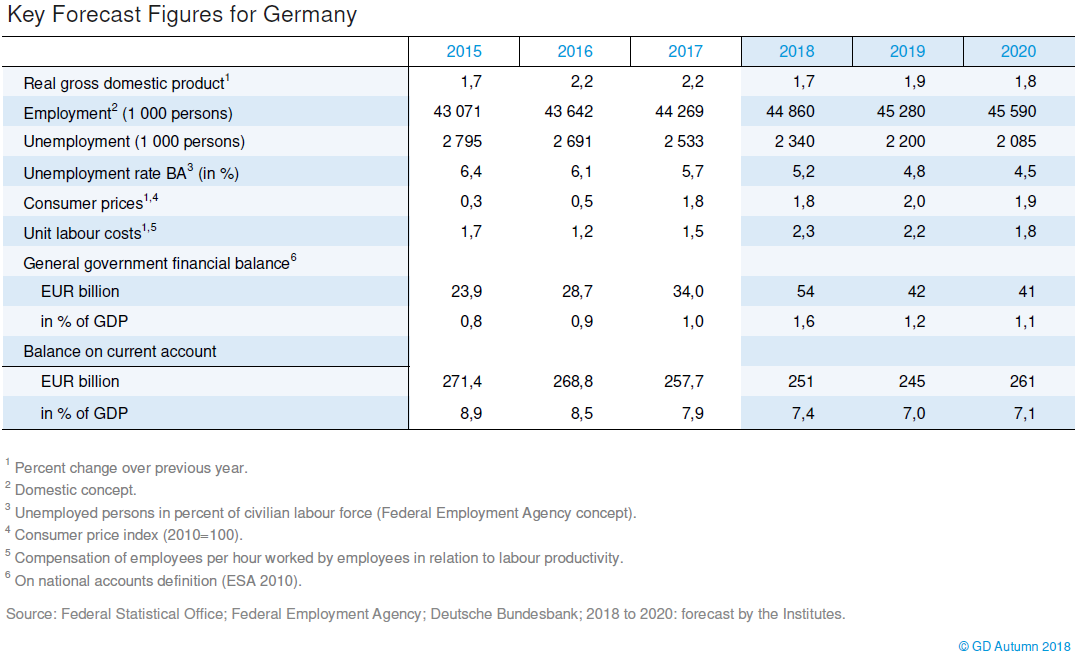