Since 2011, over five million immigrants from other EU countries have immigrated to Germany – A DIW Berlin simulation shows that this immigration has increased GDP growth by an average of 0.2 percentage points every year – More needs to be done to improve employment opportunities for the highly qualified, for example by simplifying the procedures for recognizing foreign qualifications

“Without immigration from the rest of the EU, Germany’s GDP would have grown by 1.2 percent instead of 1.5 percent in 2015. EU immigration has made—and continues to make—a considerable contribution to the economy.” Marius Clemens

Immigration from other EU countries increased Germany’s GDP growth by an average of 0.2 percentage points every year between 2011 and 2016—and for some years, such as 2015, the high point of EU immigration, by even more (0.3 percentage points). Immigrants filling open jobs increases overall economic employment, leads to additional consumer demand, and avoids bottlenecks in the labor market, which would have led to higher production costs and prices and reduced growth accordingly. These are the findings of Marius Clemens, economic researcher at the German Institute for Economic Research (DIW Berlin), and his co-author Janine Hart from the University of Potsdam, which have been published in their new study.

“Without immigration from the rest of the EU, Germany’s GDP would have grown by 1.2 percent instead of 1.5 percent in 2015,” explained Clemens. “EU immigration has made—and continues to make—a considerable contribution to the economy.”

Over 720,000 EU citizens have moved to Germany every year since 2011, totaling over 5.1 million. More Europeans have moved to Germany than have individuals from other countries, including the main countries of origin for refugees—even though the issue of refugees has dominated public debate in recent years. The figures are from the Federal Statistical Office as well as Eurostat and are somewhat more reliable for use in economic analyses than net migration figures. Net migration is only partially recorded because not everyone deregisters upon leaving Germany. 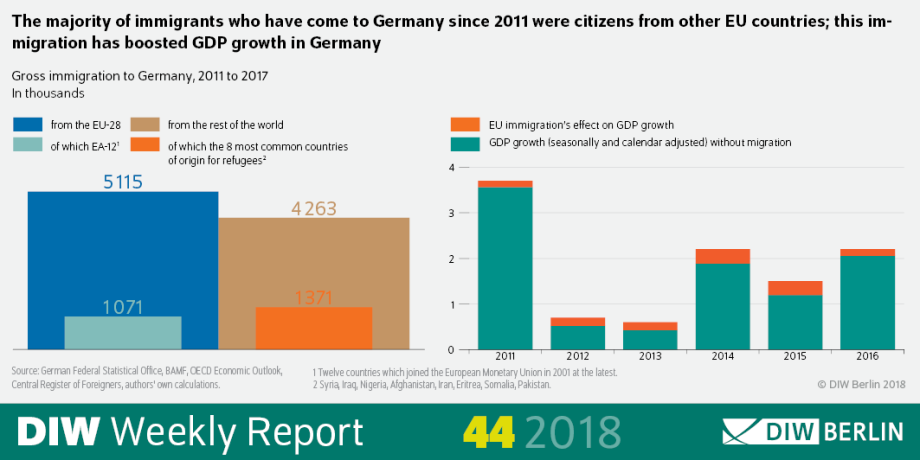 In addition to these explanations, DIW Berlin used a macroeconomic model to quantify the significance of various factors for immigration to Germany: the economy and the labor market situation in Germany compared to other EU countries play a role here, as do “migration costs.” Migration costs include actual moving costs (including visa fees and bureaucratic fees) as well as the combined monetary value of all factors, whether they be legal or psychological, that make immigration difficult. Legal barriers are important here, but they are not the only influencing factor. There are other barriers, such as a lack of direct flight connections between two countries.

The calculations show that a deteriorating overall economic situation in the country of origin compared to Germany is the main driver for immigration—it explains about 60 percent of the changes in EU immigration. Labor market developments account for around one quarter of immigration from the rest of the EU. Moreover, the development of migration costs explains a noticeable share of 16 percent of EU immigration.

“Our analysis shows that non-asylum immigration to Germany is closely related to how the German economy is developing and the situation on the labor market compared to the countries of origin,” said Hart. “EU immigrants are coming to Germany to find work—and they usually do, as many statistics show.”

Most EU immigrants are young, highly qualified, and have a high labor force participation rate. In 2017, the employment rate of EU citizens was 74.6 percent, compared to only 70.6 percent for Germans.

Considering the German population is aging and there are increasing shortages of skilled workers on the German labor market, it is important to make immigration to Germany appealing to EU immigrants. “Germany needs to work a bit harder to remain an attractive option for European immigrants, seeing as the economic situation in many other countries in the euro area is improving,” said Clemens. “It is important that immigrants receive more opportunities to find jobs matching their qualifications.”

This requires, among other things, simplifying the procedures for recognizing foreign qualifications. However, this applies to immigrants from everywhere in the world, not just the EU, according to Clemens and Hart. The planned immigration law recently presented by the Federal Ministry of the Interior is certainly a step in the right direction, but further efforts are necessary. These efforts must also work towards the goal of improving Germany's “welcoming culture,” a general positive attitude towards foreigners and migrants.