Growth and progress towards equal living conditions across the European Union continues, but the crises of recent years have shown that Europe needs reforms. In light of the European elections at the end of May, around 20 economists at the German Institute for Economic Research (DIW Berlin) examined what these reforms could look like. More competitiveness and convergence could be achieved through a “Pact for Innovation,” more stringent merger control, and industrial support targeted towards specific goals. New fiscal regulations, a stabilization fund, and regulatory harmonization would make Europe more stable and social. Member states must also present a united front to effectively face global challenges such as migration, environmental protection, and climate change.

Competition and convergence: from trade and merger control to industrial and innovation policy

“The 2019 European elections are a great opportunity for Europe to change direction. We must find an answer to the diverging and polarizing developments within Europe as well as to the increasing competition from China and the US,” emphasized Marcel Fratzscher, President of DIW Berlin. “With more uniform conditions and better incentive systems, the European economic area could become more competitive and stable socially.” With a united stance, the EU could successfully tackle external challenges such as the tariff dispute with the US. Current calculations show that this is promising, too. It has been examined how the stock indices in the US, China, and EU reacted to the announcement of higher tariffs. Decisive countermeasures made by the EU in response to tariff threats will cause the indices in the US to fall as well, while stock prices of US companies will rise following unconcerted behavior by the countries affected by the tariffs.

Additionally, merger control should be made more efficient, especially when large tech companies take over small start-ups. An evaluation of European merger control in recent years refutes criticism that EU merger control is too interventionist. In fact, it appears only seven percent of all announced mergers either have remedies imposed or are prohibited. As the evaluation shows that merger control is successful, it should become even more stringent.

Furthermore, a “Pact for Innovation” that would further develop existing structural funds could achieve more convergence and growth within the EU. Going forward, the release of funds should be linked to the implementation of structural reforms towards sustainable investments in innovation systems, suggested study author Alexander Kritikos. “In terms of the quality of national innovation systems, there is a north-south as well as a west-east divide. To attract innovators and investors, many places need fundamental improvements. These could be achieved by appropriate structural reforms that could be accelerated by a Pact for Innovation.” In addition, a more targeted industrial policy could promote regions whose industrial share still lags behind the expected values. A DIW Berlin analysis identifies types of regions in which a targeted industrial policy could produce promising results.

In order to secure and equitably distribute future prosperity, Europe must provide answers to the challenges it is facing. Five suggestions for a new fiscal package, such as new spending rules, could enable more flexibility during downturns and act countercyclically. To better combat the consequences of economic crises, Europe needs a stabilization fund, which, similar to insurance, grants money to member states during downturns and is paid into by member states when the economy is strong, with the amount based on their risk classification. In addition, an integrated equity market can help mitigate the effects of economic fluctuations. More efficient insolvency rules could be the key to further integrating the capital markets. 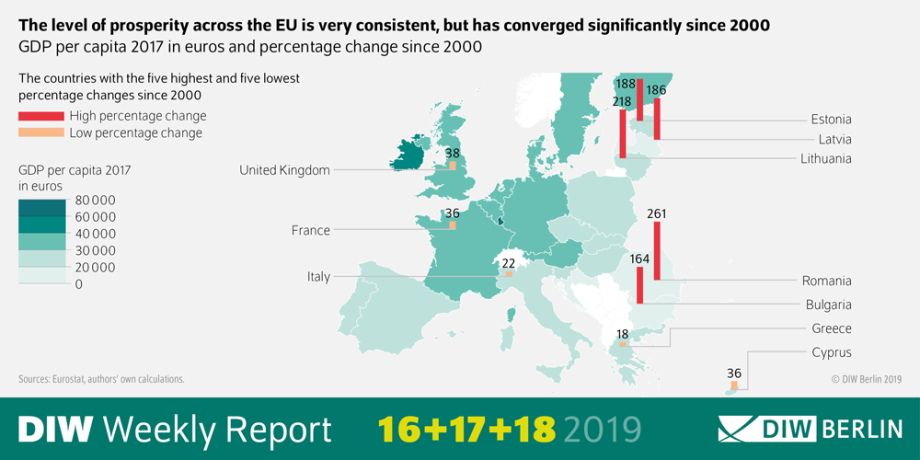 Gender equality is another important social aspect in Europe. Gender equality on supervisory boards only exists in countries with a binding gender quota, and the difference in employment history between men and women is reflected in the pension gaps that DIW Berlin documented across Europe. It is therefore necessary to establish Europe-wide rules to end the systematic discrimination of half the European population. As education is an indispensable prerequisite for Europe’s prosperity, schools should integrate an updated education platform modeled after European universities to be able to respond to new challenges such as digitalization at the earliest possible stage of education. The EU should provide funds for the independent and external evaluation of schools.

“We need more Europe in important areas to be able to react to challenges effectively—with a forward-thinking strategy focusing on Europe’s strengths.” Alexander Kriwoluzky

Moreover, there are global challenges that European states must face together, including climate policy and energy supply. “In order to reach climate targets, the energy industry must switch exclusively to renewable energies. This is technically possible and economically worthwhile if the market conditions are right throughout Europe,” argued study author Claudia Kemfert. “On the one hand, subsidies for fossil and nuclear energy must be reduced. On the other, it is necessary to improve the market conditions for integrating renewable energies by means of intelligent technology and for the use of storage.” A climate deposit as a levy on the use of emission-intensive raw materials could drastically reduce CO2 emissions without having to fear industry relocating abroad. Migratory pressure from Africa is another one of the global challenges Europe must face together. Researchers at DIW Berlin show that a single country such as Germany cannot do enough with its “Marshall Plan with Africa,” but European countries could certainly be successful if they work together.

These challenges are enormous but solvable, as the DIW Berlin experts show. And they would benefit everyone, from the EU core countries to the Southern European crisis countries and the relatively new Eastern European member states. “Three Ps are currently the greatest risks facing Europe: populism, protectionism, and paralysis,” said study author Alexander Kriwoluzky. “We need more Europe in important areas to be able to react to challenges effectively—with a forward-thinking strategy focusing on Europe’s strengths.”