Germany’s leading economics research institutes have revised their economic forecast for Germany significantly downward. Whereas in the spring they still expected gross domestic product to grow by 0.8 percent in 2019, they now expect GDP growth to be only 0.5 percent. Reasons for the poor performance are the falling worldwide demand for capital goods – in the exporting of which the Germany economy is specialized – as well as political uncertainty and structural changes in the automotive industry. By contrast, monetary policy is shoring up macroeconomic expansion. For the coming year, the economic researchers have also reduced their forecast of GDP growth to 1.1 percent, having predicted 1.8 percent in the spring.

“German industry is in recession, and this is now also impacting the service providers catering to those companies,” says Claus Michelsen, Head of the Forecasting and Economic Policy Department at the host German Institute for Economic Research (DIW Berlin). “The fact that the economy is expanding at all is due primarily to the continuing positive spending mood of private households, which is being buoyed by good wage agreements, tax breaks, and the expansion of government transfers.”

Political uncertainties are ongoing worldwide and are having an impact on foreign trade by reducing the willingness of companies to invest. “Risks arising from an escalation of the trade war are particularly high. But a disorderly Brexit would also have costs: it would cause German gross domestic product, taken by itself, to be 0.4 percent lower in the coming year than if there was an orderly exit,” Michelsen adds. 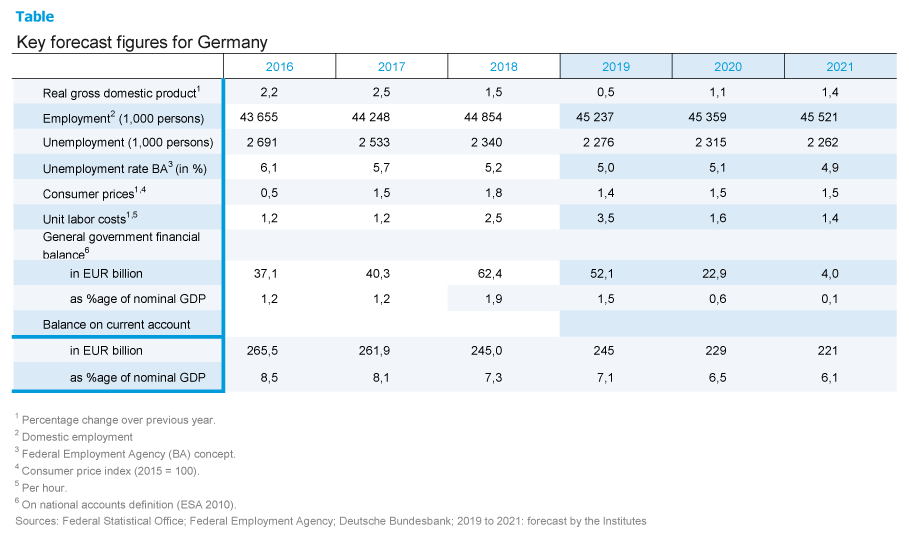 Employment growth has lost momentum as a consequence of the economic slowdown; industry even cut jobs recently. By contrast, service providers and the construction sector are still hiring. Consequently, the institutes forecast employment growth of 380,000 jobs this year. In the next two years, it is expected that only 120,000 and 160,000 new regular employment positions will be created. The unemployment rate will rise to 5.1 percent in 2020 from 5.0% in 2019 and is then expected to fall again to 4.9 percent in 2021. Consumer prices will continue to increase at a moderate pace by 1.4 percent in 2019, 1.5 percent in 2020, and 1.6 percent in 2021. Germany’s budget surplus remains hefty this year; it is expected to be around EUR 50 billion. However, this will dissipate by 2021 to around EUR 4 billion.

Aside from the economic slowdown, the main factors for this erosion are various fiscal measures such as additional pension benefits, an increase in child benefit, income tax relief, and not least the partial abolition of the solidarity surcharge. These measures are expected to amount to around EUR 22 billion this year, EUR 18 billion next year, and EUR 23 billion in 2021. In this way, monetary policy is delivering clear stimuli and supporting private consumption.

Since the spring, however, the risks for the German and the global economy have become more acute. Trade disputes between the US and China, but also conflicts within Asia, are causing uncertainty and putting strain on the global economy. A disorderly Brexit would also put strain on the European economy, and particularly the German economy. In Germany, moreover, the processes of structural change in automotive manufacturing present risks for the highly important auto market.