The corona pandemic leaves substantial marks in the German economy and its impact is more persistent than assumed in spring. In their autumn report, the leading German economic research institutes have revised their economic outlook downwards by roughly one percentage point for both this and next year. They now expect gross domestic product to fall by 5.4 percent in 2020 (previously -4.2%) and to grow by 4.7 percent (5.8%) in 2021 and 2.7 percent in 2022.

The downgrade of the forecast follows a more pessimistic assessment of the recovery process. "Although a substantial part of the drop in output experienced in spring has already been recovered, the remaining catch-up process is the more difficult part of the return to normality," said Stefan Kooths, head of forecasting at the Kiel Institute.

The recovery is being held back by those sectors that are particularly dependent on social contacts, such as restaurants and tourism, the event business and air traffic. "Activity in this part of the German economy will remain depressed for some time to come and will catch up with the rest of the economy only once measures to control the pandemic have largely been dropped, which we do not expect before next summer," said Kooths. 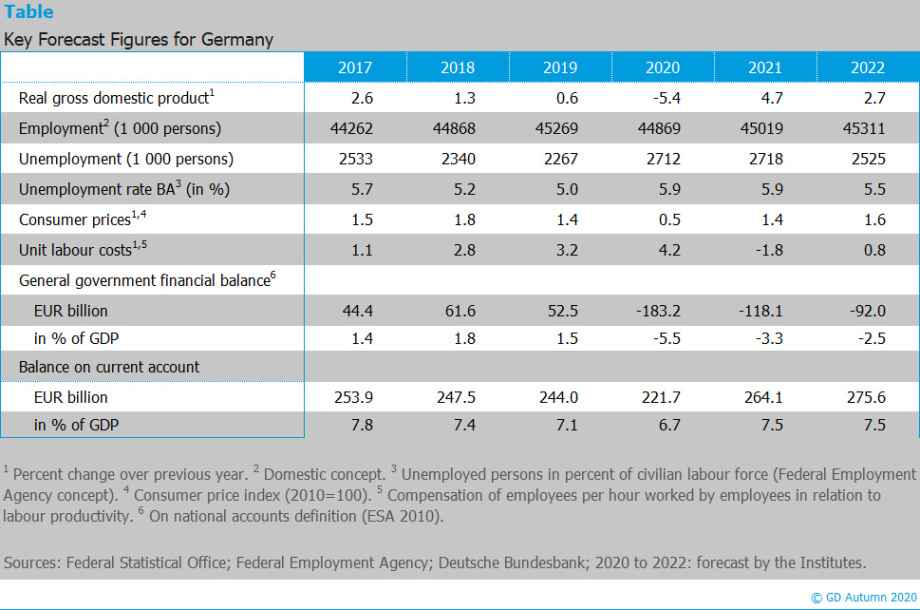 In addition, investment is slow to recover because many companies have seen their equity positions deteriorate as a result of the crisis. The recovery is being driven primarily by exports, which had contracted particularly sharply in the course of the crisis.

The pre-crisis level of output will not be reached until the end of 2021 with GDP then being still 2.5 percent below the level that would have prevailed without the pandemic. Normal capacity utilization is expected to be reached only by the end of 2022. Kooths: "The consequences of the crisis are by no means over once the slump has been made up for. Production capacities are expected to be about one percent lower than pre-crisis estimates over the medium term, although the longer-term damage of the crisis is particularly hard to assess, as is the impact of policy responses.”

The corona crisis has also had a clear impact on the labor market. Despite massively falling back on short-time working schemes, an estimated 820,000 jobs were lost by mid-year. Since then, the number of people in employment has risen again slightly, but the pre-crisis level will not be reached until mid-2022. The unemployment rate is expected to rise to 5.9 percent this year and next year, and to fall slightly to 5.5 percent in 2022.

The economic stimulus packages, in conjunction with the automatic stabilizers, have helped to keep private disposable incomes relatively stable, even in the acute phase of the crisis. In return, the general government will incur a record high budget deficit of EUR 183 billion this year. In 2021 and 2022, deficits will remain substantial at 118 billion euros and 92 billion euros, respectively.

The most important risk to the forecast stems from the still uncertain course of the pandemic. The institutes assume that starting in spring next year, disease control measures can be rolled back to such an extent that they no longer have a significant impact on economic activity by autumn. The unclear extent of corporate insolvencies in Germany and abroad as a result of the crisis also contributes to forecast uncertainty. In addition, various trade conflicts remain a source of concern. A positive risk to the outlook is the sharp rise in private savings which, if released more quickly than assumed in the forecast, could translate itself into a quicker than anticipated recovery, particularly in the consumer-related sectors of the economy. 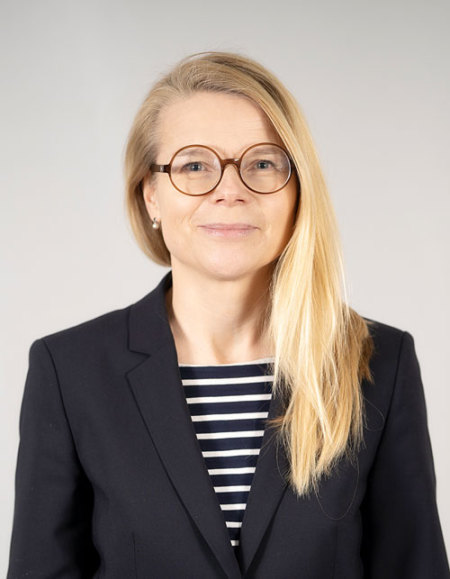 Press Speaker and Deputy Head in the Communications Department