The SOEPprize is funded by the Society of Friends of DIW Berlin (VdF) and the winners were selected by the SOEP Survey Committee. We are proud to present the 2013 prize winners, selected from the 115 eligible scientific and 80 media contributions registered in our SOEPlit database 2011 and 2012 (excluding publications by SOEP staff). These publications provide striking testimony to the high level of scholarly research that can be produced using SOEP data. The awards ceremony was held at the Happiness Colloquium on September 20, 2013. 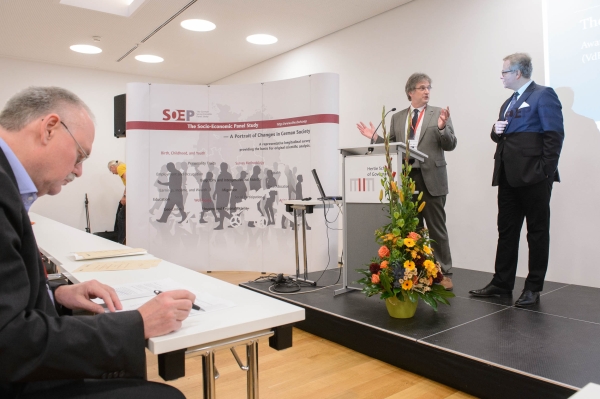 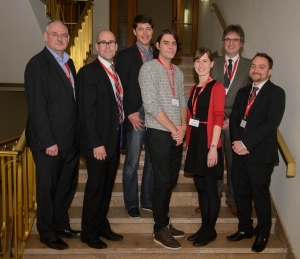 Some of the prize winners.Photo: Stefan Röhl for DIW Berlin

In this article, the young team of experimental economists around Leibniz award winner Armin Falk shows that economists would be well advised to expand their research to consider psychological concepts and to integrate these into their models to better understand the mechanisms underlying individual action.
Although both economists and psychologists seek to identify determinants of heterogeneity in behavior, they use different concepts to capture them. In this review, we first analyze the extent to which economic preferences and psychological concepts of personality, such as the Big Five and locus of control, are related. We analyze data from incentivized laboratory experiments and representative samples and find only low degrees of association between economic preferences and personality. We then regress life outcomes (such as labor market success, health status, and life satisfaction) simultaneously on preference and personality measures. The analysis reveals that the two concepts are rather complementary when it comes to explaining heterogeneity in important life outcomes and behavior.

The first of the Second Prizes goes to two economists whose article explores the question of how voluntary vs. involuntary transitions to retirement affect individual well-being.
Abstract: The life cycle model predicts that individuals substitute leisure for consumption when they retire. We show that the effect of retirement on various well-being measures available in the German Socio-Economic Panel (SOEP) are compatible with this prediction: the overall effect on life satisfaction is negligible, while satisfaction with the free time increases and satisfaction with household income decreases. The life cycle model also predicts that involuntary retirement is likely to have adverse effects because individuals would actually prefer to work in order to consume more, but are prevented from doing so. They find that indeed, involuntary retirement results in an overall negative effect that can partly be explained by a bigger drop in income satisfaction and a smaller increase in satisfaction with the free time.

The second Second Prize—this one from the field of psychology—goes to a team of two British researchers who completed their study based on the SOEP data during a research stay at the Paris School of Economics. In it, they explore how individual personality traits affect the ability to adjust psychologically following illness or disability and thus to regain previous levels of life satisfaction.
Abstract: Personality traits prior to the onset of illness or disability may influence how well an individual psychologically adjusts after the illness or disability has occurred. Previous research has shown that after the onset of a disability, people initially experience sharp drops in life satisfaction, and the ability to regain lost life satisfaction is at best partial. However, such research has not investigated the role of individual differences in adaptation to disability. The authors suggest that predisability personality determines the speed and extent of adaptation. The authors analyzed measures of personality traits in a sample of 11,680 individuals, 307 of whom became disabled over a 4-year period in SOEP. The authors show that although becoming disabled has a severe impact on life satisfaction, this effect is significantly moderated by predisability personality. After 4 years of disability, moderately agreeable individuals had levels of life satisfaction 0.32 standard deviations higher than those of moderately disagreeable individuals. Agreeable individual adapt more quickly and fully to disability; disagreeable individuals may need additional support to adapt. Whereas the approximately 50% who stay loyal to either the CDU or the SPD (or remain independent) are the stabilizing base of the party system, the 50% who are unstable partisans may be the crucial element in elections and in determining periods where one major party will be dominant over the other.

The third Second Prize—this one from the field of political science—goes to a team of three political scientists. In their article, they examine partisan identification over a 24-year period. They use mixed latent Markov models to identify change and stability in individual-level attachment or identification voters have with political parties. Their focus is on the voters who report long-term partisan identification with the German parties SPD and CDU.
Abstract: Over the past half century, scholars have utilized a variety of theoretical and methodological approaches to study the attachment or identification voters have with political parties. However, models of partisan (in)stability ignore its bounded character. Making use of Mixed Latent Markov Models, we measure the change and stability of individual-level West German partisan identification captured over a 24-year period via the German Socio-Economic Panel (SOEP). Results suggest that distinctive subpopulations exist that follow different patterns of partisan stability. One party's loss is not necessarily another party's gain.

The first of the Junior Prizes—for a study in the field of economics—goes to Christina Felfe from the Swiss Institute for Empirical Economic Research (SEW) at the University of St. Gallen.
Abstract: Women with children tend to earn lower hourly wages than women without children—a shortfall known as the ‘motherhood wage gap'. While many studies provide evidence for this empirical fact and explore several hypotheses about its causes, the impact of motherhood on job dimensions other than wages has scarcely been investigated. In order to assess changes in women's jobs around motherhood, Christina Felfe uses data from the German Socio-Economic Panel and employs a first difference analysis. The results reveal that women when having children accommodate at their original employer primarily through adjustments in working hours. Yet, when changing the employer women adjust their jobs in several dimensions, such as different aspects of the work schedule (working hours, work at night or according to a flexible schedule) as well as the level of stress. Further analysis provides some limited support for the motherhood wage gap being explained by adjustments in the work conditions.

The second Junior Prize—for a study in the field of family sociology—goes to two sociologists for their SOEP-based publication in the renowned Journal of Marriage and Family.
Abstract: Previous research suggests that household tasks prohibit women from unfolding their full earning potential by depleting their work effort and limiting their time flexibility. The present study investigated whether this relationship can explain the wage gap between mothers and nonmothers in West Germany. The empirical analysis applied fixed-effects models and used self-reported information on time use and earnings as well as monthly family and work histories from the German Socio-Economic Panel. The findings revealed that variation in reported time spent on child care and housework on a typical weekday explains part of the motherhood wage penalty, in particular for mothers of very young children. Furthermore, housework time incurred a significant wage penalty, but only for mothers. The authors concluded that policies designed to lighten women's domestic workload may aid mothers in following rewarding careers.

Jule Specht, Boris Egloff, Stefan C. Schmukle: "Stability and Change of Personality Across the Life Course: The Impact of Age and Major Life Events on Mean-Level and Rank-Order Stability of the Big Five" (Journal of Personality and Social Psychology, 2011, 101(4): 862-882)

The third Junior Prize—for a publication in the field of psychology—goes to the research team headed by Jule Specht, who is now a Junior Professor at the Free University Berlin.
Abstract: Does personality change across the entire life course, and are those changes due to intrinsic maturation or major life experiences? This longitudinal study investigated changes in the mean levels and rank order of the Big Five personality traits in a heterogeneous sample of 14,718 Germans across all of adulthood. Latent change and latent moderated regression models provided four main findings: First, age had a complex curvilinear influence on mean levels of personality. Second, the rank-order stability of Emotional Stability, Extraversion, Openness, and Agreeableness all followed an inverted U-shaped function, reaching a peak between the ages of 40 and 60, and decreasing afterwards, whereas Conscientiousness showed a continuously increasing rank-order stability across adulthood. Third, personality predicted the occurrence of several objective major life events (selection effects) and changed in reaction to experiencing these events (socialization effects), suggesting that personality can change due to factors other than intrinsic maturation. Fourth, when events were clustered according to their valence, as is commonly done, effects of the environment on changes in personality were either overlooked or overgeneralized. In sum, our analyses show that personality changes throughout the life span, but with more pronounced changes in young and old ages, and that this change is partly attributable to social demands and experiences.

The SOEP Award for the Best Media Contribution in 2012 goes to journalist Barbara Leitner for her radio program on "Lebensläufe in Zahlen" (figures on the life course), which was broadcast on Deutschlandfunk on July 5, 2012 (link to the text of the program in German).

In her radio program, Barbara Leitner covers research findings based on SOEP data presented at the SOEP User Conference in 2012. The main theme of her program is the unequal distribution of educational opportunity and of the resulting opportunities at social advancement. In it, Barbara Leitner discusses the importance of factors including parental wealth, peer effects, and personality traits. Her program is thoroughly researched and reports SOEP findings from a broad multidisciplinary perspective while at the same time capturing the atmosphere of the conference. Barbara Leitner also succeeds in explaining SOEP research methods in terms that are clear and comprehensible to non-scientists. In sum, Leitner's program exemplifies journalistic excellence in the coverage of SOEP-based scientific findings.

Awarding of the prizes with more pictures in one document (PDF, 3.97 MB).