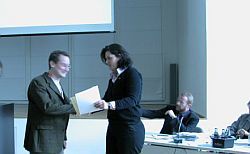 
Paul Frijters, Ph.D., Economics Program, RSSS, Australian National University, Australia, Dr. John P. Haisken-DeNew, RWI Essen, Michael Shields, Ph.D., Department of Economics, University of Melbourne, Australia: "How Well Do Individuals Predict Their Future Life Satisfaction? Evidence from Panel Data Following a Nationwide Exogenous Shock"
Comment of the program committee:
"Two growing literatures within economics are first the study of subjective measures of 'life satisfaction' (or 'happiness'), and second the use of exogenous changes or natural experiments to unravel causality. This excellent paper draws on both these literatures to provide a novel analysis of East Germans life satisfaction expectations, and their adjustment over time, where the natural experiment is German re-unification. One headline finding is that East Germans overestimated gains from re-unification. The paper is clear and well-written, and was also presented very well by John Haisken-DeNew."

Ingo Geishecker, DIW Berlin, and Holger Görg, Ph. D., University of Nottingham and Research Director of the Department of International Economics at DIW Berlin: "International Outsourcing and Wages: Winners and Losers"
Comment of the program committee:
"This paper examines the relationship between outsourcing of materials by firms and the wages of German workers - a topical subject. A novel part of the analysis is the matching in to the SOEP of measures of outsourcing derived from input-output tables. One headline finding is that outsourcing reduced the wages of the lowest-skill workers and increased the wages of the highest-skill workers. This is a thorough analysis, well-executed with clear findings presented by Ingo Geishecker."

Thomas Siedler, ISER, University of Essex and DIW Berlin: "Is the receipt of social assistance transmitted from parents to children? Evidence from German panel data"
Comment of the program committee:
"The reasons why some people end up receiving social assistance and other do not has been a topic of great policy interest. This very good paper considers this topic, focussing in particular on the role played by receipt of social assistance during one's childhood, and whether effects differ for men and women, and between the former East and West Germanies. The paper is distinguished by its combination of different methods to check the robustness of results (OLS, instrumental variables to check potential endogeneities, and Manski bounds analysis), together with variations on key definition. The paper is well-written and was excellently presented."

Short report about SOEP2004 and the prize award in German / English