The German economy continues to boom and the upswing has recently gained breadth. In addition to continuing strong consumer demand on the domestic front, the flourishing global economy is making itself felt in a growing Germany economy. In view of strong exports and abating global risks companies in capital-intensive manufacturing and processing industries are currently investing more. This activity is adding momentum to the upswing.

The German Institute for Economic Research (DIW Berlin) is raising its forecast compared to the fall, partly because the first half of 2017 was more robust than currently documented in the official statistics. The German economy is expected to grow by 2.2 percent this year and next. The growth rate will likely be somewhat lower again in 2019: around 1.6 percent. In September, the growth forecast for this year and next was 1.9 percent; for 2019 the forecast remains unchanged. 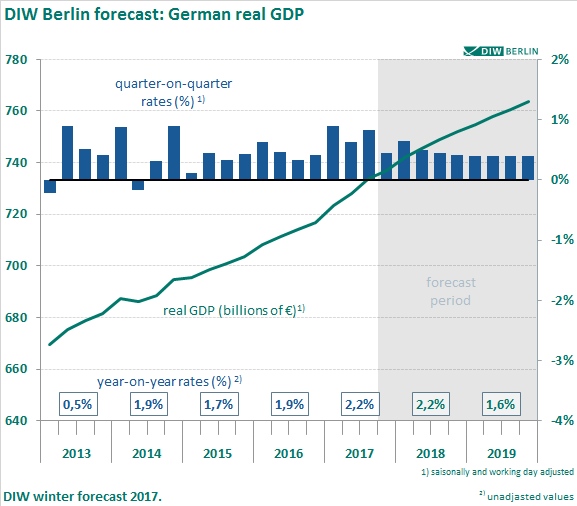 The German economy is booming right now. Production is running at high capacity and wages and prices should gradually begin to rise more substantially than recently discernable. But there is no sign of overheating. This year the unemployment rate was 5.7 percent, and it should drop to 5.2 percent by 2019. Despite the exceptionally favorable situation in the labor market wage hikes are only moderate right now. Cost pressure on companies and the prices of manufactured goods and services have virtually remained the same. At 1.7 percent, this year’s inflation rate is significantly higher than it was last year. This is due almost entirely to the fact that energy prices are no longer falling and hence, cost relief from this side has ceased. But even in 2019, the inflation rate is not expected to top the two-percent mark. Thus, there is no wage-price spiral typical of an overheating economy on the horizon.

The persistently high unemployment rate in many European Union member states is partially responsible for this, as migration from other EU countries feeds the increase in employment in Germany. For this reason, the employee negotiating position in collective bargaining rounds has improved only gradually. And energy prices have held down the inflation rates of past years, which probably also contributed to the moderation in wage agreements. Most of them have terms that will not expire until next year and will therefore leave their marks on the wage trend for a longer period.

In the European Union and the euro area the economy is also on an upswing, and production is rising more sharply than potential output. As a result, the euro area is approaching normal capacity utilization as measured by conventional estimation methods. However, unemployment remains high in many countries. Both private and public debt levels are declining in relation to GDP in many places, but they are still at rather high levels. And many bank balance sheets – particularly those in Italy – still harbor risks because a significant volume of loans is at risk of default.

Under these circumstances, the European Central Bank (ECB) would be well advised to tighten monetary policy in a very gradual manner only. It would be premature to commit to a long-term phaseout of unconventional monetary policy or future interest rate increases at this time because aside from fluctuations caused by energy prices, the inflation rate should remain lower than the ECB’s inflation target of below, but close to two percent during the forecast horizon. By following a rapid phaseout policy, the ECB would risk exposing the euro area economy prematurely to a significant loss of momentum. And both banks and the public budget would face risks from changing interest rates; in the worst case, rising financing costs could destabilize the financial system again.

For this forecast, we assumed cutbacks in the ECB asset purchase program as of January 2018 and the first interest rate increase in mid-2019. But even this gradual tightening of monetary policy should slow down the current strong upswing in the euro area toward the end of the forecast horizon. Other central banks will also rein in their monetary policy during the forecast horizon, slowing down the global economy’s very strong momentum at present.

Toward the end of the forecast horizon, this will also dampen German exports and its expanding GDP as well. The momentum in the labor market will slow down in turn: 650,000 jobs will have been created in 2017, but in 2019 the number of new jobs will not hit the 300,000 mark. Because of this, household income will not expand as strongly as it did this year and in the two previous years and private consumption will gradually weaken over the forecast horizon. The German economy is expected to return to a flatter growth curve. Capacity utilization will decline slightly again and the boom will have passed its peak.

However, growth could be higher than forecast here, particularly later in the forecast horizon, for financial policy could very well sustain more momentum than assumed. Regardless of the outcome of the government formation process, even if a new German election is held, any new government will most likely take advantage of the considerable margin for fiscal maneuver and either reduce taxes and social security contributions significantly or increase transfer payments. Since at this time we do not know how measures with very different effects will be designed, the present forecast is, as usual, based on the fiscal status quo. Were the state to implement supplementary measures instead, the German economy could grow at a much higher level. In view of the pace of political decision-making processes, this is more likely to kick in 2019. For example, measures worth the frequently debated volume of 15 billion euros could result in an increase in the growth rate of up to half a percentage point.

The fiscal margin for maneuver should not be overestimated. Germany’s financing surplus will be 47 billion euros this year and should rise to 54 billion euros by 2019. However, a major portion of the surplus in the public budget is a result of the favorable economic situation – it is not permanent and should not be used for long-term planning. And the public sector is currently benefiting from unusually low interest rates. As monetary policy is normalized, the savings associated with low interest rates will gradually decrease.

Measures targeted at supporting short-term economic growth are not appropriate in the current environment. In view of the current boom, financial policy measures should focus on positively influencing the German economy’s longer-term growth trend. The looming demographic shift is an unfavorable factor that challenges policy makers to make the general conditions for investment in Germany more attractive. As the working age population declines, the remaining labor pool must be able to work more productively. And when there are fewer and fewer working age people in Germany, relatively more people must want to enter the labor market and be as productive as possible. One way to achieve this is reducing the tax and transfer burden on labor. Another appropriate measure could be based on targeted public expenditure with the character of investment – in education-related or infrastructure projects. Companies also need more incentives to invest in Germany’s capital stock.

The external environment continues to pose uncertainty for economic development in Germany. In many respects, the course of economic policy in the USA is still ambiguous, and the plans its government announces are being implemented hesitantly. Should the U.S. terminate trade agreements, German exporters would also feel a negative impact from the resulting constriction in the international flow of goods – a scenario the present forecast does not consider.

The European environment harbors other major risks, although Brexit has not yet seriously weakened the German economy. In this forecast, we assumed that the economic relationship between the EU and the UK would not change within the forecast horizon: either the exit process would be canceled, or a follow-up treaty would be concluded that creates a climate for trade and investment similar to that of the EU treaty. If such an agreement proves impossible, Brexit could impair the European and German economies more than assumed here.

And further risks may also arise from the economic situation in the euro area. In the wake of reining in expansionary monetary policy, a faster rise in the interest rate than assumed here could weigh on bank stability in many countries, and thus – in the worst case – reigniting a financial crisis in the euro area. This would noticeably weaken the European and German economies.