According to DIW Berlin estimates, the German economy should grow by 1.9 percent this year and 1.7 percent next year. The GDP growth forecast has thus decreased by 0.5 percentage points for this year and by 0.2 percentage points for the coming year compared to DIW Berlin’s March forecast. Essentially, this reflects the markedly increased uncertainty concerning the economic policy environment that is affecting investment activity worldwide and curbing exports in particular. In addition, the start of 2018 was weaker than was expected in March due to some temporary factors: high rates of sick leave, broad-based strikes, and an above-average number of holidays. 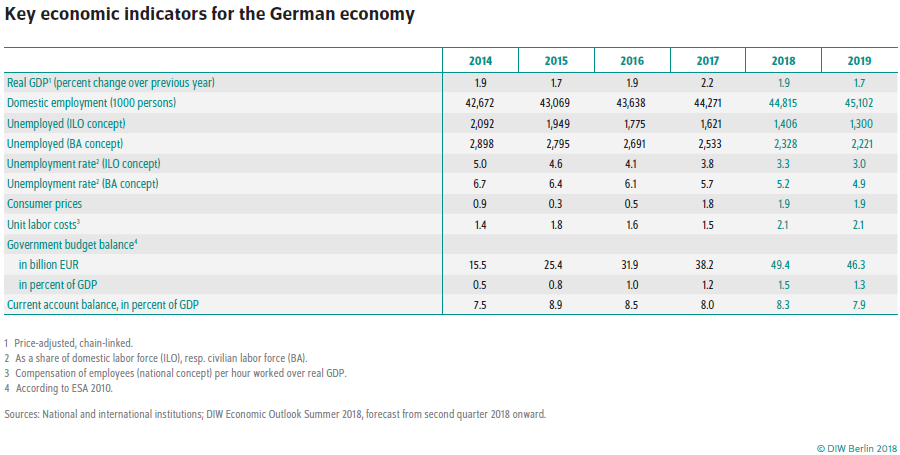 The pace of expansion is likely to be higher in summer than at the beginning of the year. However, the economy is likely to lose some momentum compared to last year, as global economic conditions have deteriorated noticeably with the introduction of trade restrictions and concerns about an escalation in trade policy conflicts between the United States and other economic regions. Following the Italian election and the political quarrels in Spain, concerns about the integrity of the European Monetary Union have increased again; Brexit negotiations also continue to be a cause for significant concern. In addition, geopolitical risks, especially in the Middle East, have recently intensified once again. All this should lead many companies to act more cautiously and impair global demand for investment goods. This will also dampen production in Germany, as on the one hand, investment dynamics are likely to lose some momentum despite well-utilized capacities, and on the other, machines are the German economy’s most important export commodity. Thus, the worldwide lower demand will also be reflected in the industrial sector’s order books.

While exports are weakening somewhat, the German economy can continue to rely on quite strong private consumption in the forecast period. The labor market situation is exceptionally favorable; moreover, wage agreements should gradually become higher in light of the continuing decline in unemployment—the rate will be around 5.2 percent this year and around 4.9 percent next year. Thus, more and more people have a job—the increase is pegged at just under 550,000 people this year and almost 300,000 people next year—and employees are earning decent wages overall. This boosts private consumption.

In addition, starting next year in particular, the federal government is planning to expand spending and reduce taxes. The plan to finance statutory health insurance by splitting the costs equally between employers and employees as well as the reduction of the unemployment insurance contribution rate will relieve employees in the amount of almost ten billion euros at the beginning of 2019. The announced increase in children benefits and tax allowances, as well as the increase in the insurance periods recognized for bringing up children (Mütterrente) and the introduction of a basic pension, are providing billions of euros in stimuli. Moreover, the federal government is increasing its investment expenditures for things such as broadband expansion, research and development, and public housing. These expenditures are likely to stimulate the economy somewhat.

Despite the expansionary fiscal policy, the government’s financial situation will remain favorable for the time being. Public revenues are sputtering, since revenues from value- added tax are increasing significantly due to the dynamic development of consumer spending. Additionally, in light of the favorable labor market situation, income tax revenue is also rising sharply, while transfer expenditure—especially unemployment expenditure—is only increasing moderately. The resulting surpluses of 50 billion euros in the general government’s budget this year, and 45 billion euros next year, are, however, largely temporary, as they partly go back to the unusually low interest rates that the government pays on its debts. The scope for increases in long-term expenditures— such as in the area of pension insurance—or revenue reductions—e.g., a broad-based reduction of income taxes— are therefore very limited and should be oriented towards positively influencing the long-term growth of the German economy. In view of the foreseeable unfavorable demographic development, policies especially need to focus on making the environment for investment more appealing and investing in education and research. This way, the productivity of the (increasingly smaller) work force can be increased.

The high level of uncertainty regarding the political environment is affecting investment activity and thus the economy, even without the problems worsening. In addition, the various trouble spots are creating uncertainty about the economic outlook, as generally favorable economic prospects are overshadowed by considerable risks. With the introduction of tariffs on American imports of steel and aluminum and the introduction of counter-tariffs by the European Union, the trade conflict has escalated. The adverse effects on international trade, which are conceivable as the next step in a possible escalation—such as U.S. tariffs on cars—could result in production losses of several billion euros and thus a decline in the growth of the German economy by a few tenths of a percentage point.

The difficult economic situation in Italy also has the potential to affect the economy beyond the uncertainty assumed in this forecast. If the new Italian government insists on only partially repaying public debt and such defaults prove likely, this could lead to renewed tensions in the financial markets and a resurgence of the crisis in the euro area.

In this environment, it is more urgently needed than ever before to strengthen the monetary union’s institutions and, in particular, to ensure a more stable banking and financial system that meets the conditions of a monetary union—for example by introducing a common deposit guarantee and clear rules for orderly debt restructuring for the member states.