Germany’s leading economic experts raised their forecasts for 2018 and 2019 slightly in their Spring Joint Economic Forecast released on Thursday in Berlin. They now expect economic growth of 2.2 percent for this year and 2.0 percent for 2019, versus 2.0 percent and 1.8 percent respectively in their autumn forecast. “The German economy is still booming, but the air is getting thinner as unused capacities are shrinking“, notes Timo Wollmershaeuser, ifo Head of Economic Forecasting. Commenting on the new German government’s economic policy, he adds: “It is precisely when the government’s coffers are full that fiscal policy should reflect the implications of its actions for overall economic stability and the sustainability of public finances. The extension of statutory pension benefits outlined in the coalition agreement runs counter to the idea of sustainability.” 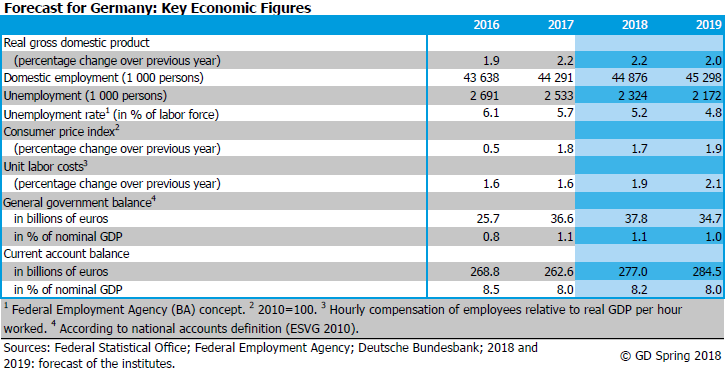