The coronavirus pandemic is triggering a severe recession in Germany. Economic output will shrink by 4.2 percent this year. This is what the leading economics research institutes expect in their spring report. For next year, they are forecasting a recovery and growth of 5.8 percent.

Gross domestic product is likely to have shrunk by 1.9 percent in the first quarter of 2020 alone. In the second quarter, it will slump by 9.8 percent as a result of the shutdown. This is the sharpest decline ever recorded in Germany since quarterly national accounts began in 1970; it is also more than twice as steep as the decline during the global financial crisis in the first quarter of 2009.

“The recession is leaving very clear marks on the labor market and the government budget,” says Timo Wollmershäuser, Head of Forecasts at ifo. “At its peak, the unemployment rate will jump to 5.9 percent this year and the ranks of short-time workers will swell to 2.4 million.” On average, the unemployment figures will rise by almost a quarter of a million to 2.5 million year over year. 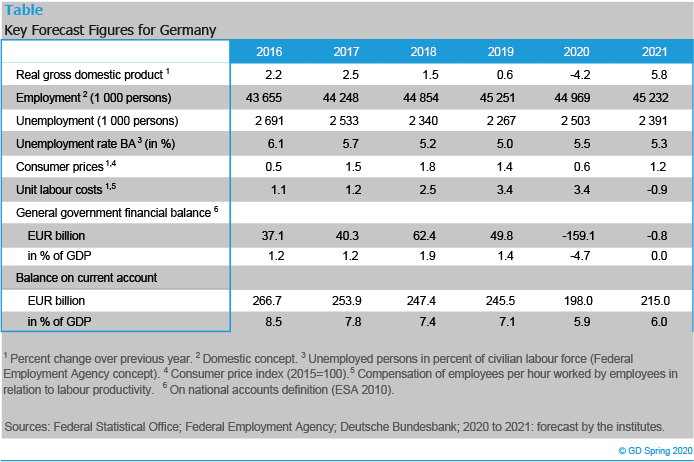 “Germany is in a good position to cope with the economic slump and to return in the medium term to the economic level that it would have reached without the crisis,” Wollmershäuser says. Given its favorable financial situation, the government can afford to enact far-reaching measures to cushion the short-term negative consequences for companies and private households. This year, these measures will lead to a record deficit for the general government (federal government, states, municipalities, social security) of EUR 159 billion. General government gross debt is expected to increase to 70 percent of nominal GDP this year.

The downside risks associated with this forecast are considerable. For instance, the pandemic could abate much more slowly than anticipated. Efforts to restart the economy might also be less than successful and could trigger a new wave of infections. What’s more, additional infection control measures could come into force, which could lead to longer or more extensive production stoppages. This would increase the likelihood of distortions in the financial system as a result of increasing corporate insolvencies that could not be prevented by state support.