The German economy is steering through difficult waters and faces the highest inflation rates in decades. In their spring report, the leading German economic research institutes revise their outlook for this year significantly downward. The recovery from the COVID-19 crisis is slowing down as a result of the war in Ukraine, but remains on track. The institutes expect GDP to increase by 2.7 and 3.1 percent in 2022 and 2023 respectively. In the event of an immediate interruption to Russian gas supplies, a total of 220 billion euros in German economic output would be at risk in both years. 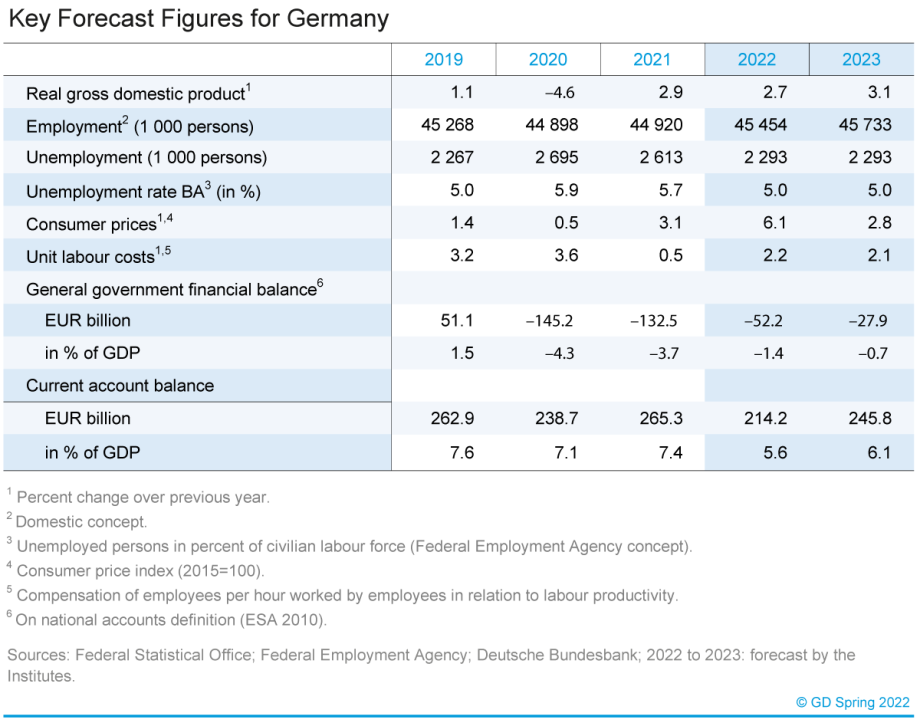 "The recovery process in the German economy is once again being delayed. The economic picture is shaped by opposing forces, all of which are driving up prices," says Stefan Kooths, vice president and research director business cycles and growth at the Kiel Institute for the World Economy.

"Fading pandemic restrictions are supporting the service sectors while continuing supply chain bottlenecks in the wake of the COVID-19 crisis are still disturbing manufacturing output. The shockwaves from the war in Ukraine are weighing on economic activity on both the supply side and the demand side. Government stimulus packages during the pandemic already had an inflationary effect. Increasing prices of critical energy commodities following the Russian invasion further fuel the upward pressure on prices."

Due to the high level of uncertainty about energy supplies from Russia, which are important for Germany's economic performance, the institutes have calculated two scenarios in their spring report. One assumes ongoing gas deliveries and no further economic escalation from the war in Ukraine (baseline scenario), one assumes a sudden supply stop of Russian energy (adverse scenario).

In the baseline scenario, Germany's gross domestic product (GDP) increases by 2.7 percent in 2022, and in the event of an energy supply stop by only 1.9 percent. In their fall report, the institutes’ forecast was 4.8 percent. The main reasons for the revision are the war in Ukraine and the worse than expected course of the pandemic in the past winter half-year. In 2023, GDP is forecast to increase by 3.1 percent, and to contract by 2.2 percent in the event of a supply stop (Autumn report +1.9 percent). The cumulative loss of GDP in 2022 and 2023 in the event of a supply freeze is likely to be around 220 billion euros, equivalent to more than 6.5 percent of annual economic output.

The inflation forecast amounts to 6.1 percent in 2022, the highest number in 40 years. In the event of an energy supply stop, it would even increase to 7.3 percent, a record-high in post-war Germany. Next year's rate of 2.8 percent (supply stop: 5 percent) will also remain well above the average since reunification.

According to the baseline scenario, the unemployment rate will fall from 5.7 percent in the previous year to 5.0 percent (2022 and 2023). The adverse scenario foresees 5.2 percent (2022) and 6.0 percent (2023) with most of the shock being absorbed by reduced working hours.

"If gas supplies were to be cut off, the German economy would undergo a sharp recession. In terms of economic policy, it would then be important to support marketable production structures without halting structural change. This change will accelerate for gas-intensive industries even without a boycott, as dependence on Russian supplies, which have been available at favorable prices up to now, is to be overcome quickly anyway," Kooths said. "Policymakers should be careful not to provide poorly targeted transfers to cushion high energy prices. If such support schemes are handed out on a wide front, it will further drive up inflation and undermine the important signaling effect of higher energy prices. This in turn exacerbates the problems of low-income households and increases overall economic costs.”

Deputy Head of Department in the Firms and Markets Department