As of early summer 2019, the German economy is a little weaker than in 2018, but after a strong start to the year and thanks to a buoyant domestic economy in particular, it is performing well overall—better than many think.

GDP is expected to grow by 0.9 percent in 2019 and by 1.7 percent in 2020 according to the latest forecast by the German Institute for Economic Research (DIW Berlin), which has been revised downwards slightly compared to the spring (March 2019 forecast: 1.0 percent for 2019 and 1.8 percent for 2020).

Two trends underlie these figures: the service sector and the construction industry are benefiting from dynamic domestic consumption and providing strong stimuli. The industrial sector, which is more susceptible to fluctuations in foreign demand, is experiencing a lean spell, against the backdrop of Brexit worries and uncertainties around the global trade war. Value added in the manufacturing sector is expected to fall by two percent this year.

Unemployment in Germany will continue to decline. An increase is expected in the second quarter of 2019, attributable solely to a statistical fluke. Researchers led by DIW’s chief economic forecaster, Claus Michelsen, predict an average unemployment rate of 4.9 percent for 2019 and 4.6 percent for 2020, new lows since reunification. Demand for labor remains high, especially in consumer-related sectors (retail and hospitality), construction, public services, education, health, and information and communication. The continuing good situation on the labor market translates into rising wages, even if the increase is no longer as dynamic as it has been of late.

Fiscal policy measures, such as a return to financing statutory health insurance by splitting the costs equally between employers and employees and a pension increase in summer 2019, are also doing their part to provide private households with comfortable income growth (+3.1 percent this year and +2.8 percent next year). Combined with low inflation, this gives private consumption an extra boost. 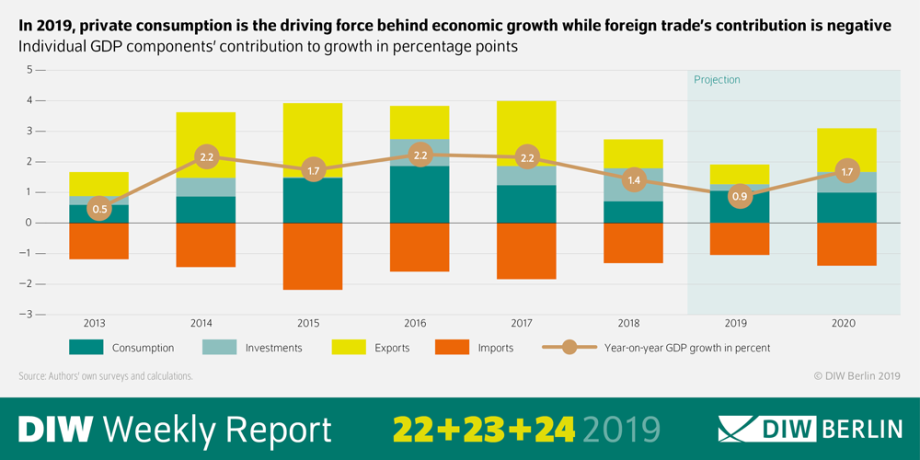 Foreign trade is barely contributing to growth over the course of the two forecast years, as imports are rising at least as strongly as exports. Exports are being adversely affected by the economic slowdown in some important sales markets and by uncertainties such as Brexit and the ongoing trade conflicts. Business is still good for German exporters, but the pace is slowing down a little.

For the state, the slight slowdown in momentum means that public surpluses are shrinking. According to the forecast, however, surpluses are likely to remain very high with a surplus of 40 billion euros in 2019 and 32 billion euros in 2020, most of which is generated at the federal level. The financial situation of many municipalities, on the other hand, is a cause for concern. Lacking adequate financial resources, many struggle to properly fulfill their public service mission. The time has long come to reorganize finances so that the municipalities have more financial resources—even if that means loosening debt constraints somewhat.

Marcel Fratzscher, DIW President
“The German economy has slowed down somewhat, but remains sound. However, the risks have rarely been as high as they are now. The trade conflicts fueled by the US President pose the greatest risk to the German economy, especially if Donald Trump decides to target Germany next. We should prepare ourselves for this scenario by coordinating a common European strategy and strengthening European institutions.”

Claus Michelsen, DIW Chief Economic Forecaster
“The German economy is performing much better than many think. However, these are uncertain times, and the industrial companies focused on exports are feeling the effects in particular. It is therefore all the more important to take a clear stance on economic and financial policy. In Germany, the municipalities, which are responsible for many important investments, should be strengthened financially. This supports domestic demand and is good for Germany as a business location.”

Simon Junker, German Economy Expert
“The domestic economy is doing very well. Jobs are being created, albeit at a slower pace than in previous years, and wages and incomes are rising, benefiting private consumption and all sectors that depend on it. The state is also spending money. All this is reflected in dynamic imports and a declining current account surplus.”

Marius Clemens, Public Finances Expert
“Tax revenues reflect the two-pronged picture of the current economic situation: wage tax revenues are rising strongly while corporate and trade tax revenues are developing more moderately. But all in all, the time of billion-euro-surpluses is not over—the coffers will only be a little less full than we have been used to for some years.”