Housing costs have risen sharply since 1996, especially for renters - Two thirds of older renting households spend over 30 percent of their income on rent compared with 38 percent in 1996 – People living alone in particular are affected by high housing costs

Housing costs are rising in Germany. This is becoming a more widespread problem for individuals aged 65 and older, as their incomes are not increasing at the same rate as housing costs. As a result, housing costs are becoming a burden for an increasing number of older individuals, and even an overburden for a significant proportion of them. These are the key findings of a joint study by the German Institute for Economic Research (DIW Berlin) and the German Centre of Gerontology (DZA).

In 2016, renter households with a reference person aged 65 or over spent an average of 34 percent of their income on housing, i.e., on rent and ancillary costs. In contrast, owner-occupied households only spent 15 percent of their income on ongoing housing costs, such as interest and repayments on real estate loans and ancillary costs. Since 1996, housing costs for renters aged 65 and older have increased much more sharply (+101 percent) compared to housing costs for home-owners (+77 percent).

A growing proportion of older renters are overburdened by housing costs

Proportionately, there are more owner-occupied households amongst older individuals than there were 20 years ago (45 percent vs. 56 percent), mainly because more and more older individuals in the higher income brackets own their property. In contrast, the majority of low income, older households rent. Among the 20 percent with the lowest incomes—the bottom quintile of income distribution—66 percent of this age group are renters. For these people in particular, rapidly rising housing costs pose a significant burden. 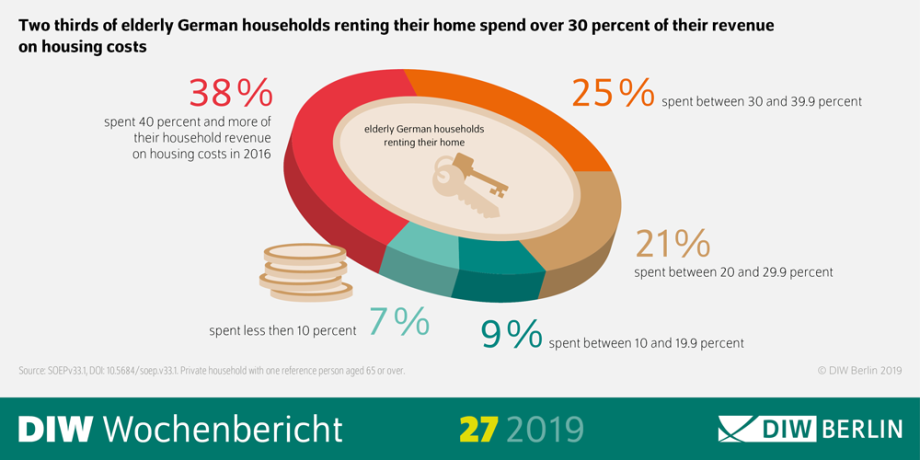 “Older people with low incomes rent significantly more often than others in their age group, and they in particular are being confronted with a rapid increase in housing costs. This means that living space is becoming increasingly unaffordable for many senior citizens,” said study author Laura Romeu Gordo from the DZA.

The situation for individuals living alone is particularly challenging. Single people aged 65 and over who rent spend more than one third of their income on ongoing housing costs on average.

The authors of the study propose several countermeasures. One is to promote home ownership, although that would only have an effect in the long term. This is because generally, younger people purchase homes or apartments, for example when they start having children, rather than older people.

“A second approach is to ensure those affected have sufficient income,” said Markus Grabka, distribution researcher at DIW Berlin and one of the study authors. “The federal government’s plan to dynamically adjust housing benefits is certainly a step in this direction.”

The study is based on data from the Socio-Economic Panel (SOEP) as well as from the DZA' German Ageing Survey (DEAS).

The Socio-Economic Panel (SOEP) study is the largest and longest-running multidisciplinary longitudinal study in Germany. The SOEP is located at DIW Berlin and funded by the federal and state governments as part of Germany's research infrastructure under the umbrella of the Leibniz Association (WGL). Since 1984, the survey institute TNS Infratest has surveyed several thousand people annually for SOEP. There are currently about 30,000 respondents in approximately 15,000 households. The SOEP data include information on income, employment, education, health, and life satisfaction. Since the same individuals are surveyed each year, SOEP can not only identify long-term social trends but is also able to analyze in detail the group-specific development of individuals' lives.

This study was based on SOEP data from households with at least one person aged 65 or over. Similarly, in the DEAS, individuals aged 65 and over are surveyed.