A key component of the coalition agreement between the CDU/CSU and SPD signed on November 27 is the adoption of a minimum wage for Germany. Under the agreement, a statutory minimum wage of €8.50 per hour will be introduced across the country starting in 2017. Pushed as a make-or-break issue by the SPD during the negotiations, its introduction follows months of heated debate about its desirability and potential consequences. Although economists have yet to reach a consensus on the issue, the recent experience of the UK provides some valuable insights about what we should expect from the introduction of a minimum wage in Germany.

Germany is one of a handful of OECD countries that does not have a national statutory minimum wage. In the past, minimum wage legislation has been industry-specific, the outcome of generalising collective-bargaining agreements by unions and employer associations. While this decentralised approach enjoyed wide-ranging support for several decades, concerns about the growing number of low-wage workers and increasing income inequality has led political parties (with the exception of the liberal FDP) to push for a blanket national minimum wage. According to the DIW Berlin, about 6 million workers will experience a direct increase in wages under the proposed agreement. The most affected are likely to be workers employed in service industries, those residing in former East Germany, and those under 25 years of age. Figure 1 (below) summarises which groups are expected to be most affected by the new law.

The debate preceding the coalition agreement (see the Bruegel Blog for a summary) revealed wide-spread disagreement among German economists and policy-makers about the desirability of introducing a national minimum wage. The bulk of this debate focused on three contentious issues: the potential consequences of the minimum wage on unemployment, macroeconomic performance, and inequality. This article addresses these three issues in turn, drawing largely from the recent experience of the UK and discussing its relevance for Germany.

Will the minimum wage increase unemployment?

A common criticism of minimum wage legislation is that it leads to an increase in firms' wage bill without a corresponding rise in labour productivity, thereby negatively affecting the level of employment. This view was made explicit by Bundesbank President Jens Weidmann in an interview with Handelsblatt, where he declared that "[a minimum wage] deteriorates the employment chances of the low-qualified and the permanently unemployed, and complicates the access to the labour market for those who do not have pronounced job-related skills."

While the international comparison of minimum wage legislation is notoriously difficult, a notable historical example - comparable in many ways to the German case - is the introduction of a national minimum wage in the UK in 1999. As in Germany, the UK did not have a national minimum wage prior to this date, and minimum wage criteria were instead regulated at the industry-level under the auspices of the Trade Boards Act. The Labour government introduced a minimum wage of £3.60 per hour in 1999, which has since risen to £6.30 per hour. Relative to the general wage level, the minimum wage has thus increased at a must faster rate, rising from 46% of the median wage when it was introduced to over 50% today. The government also created an arms-length supervisory body, the Low Pay Commission, to evaluate and make recommendations regarding future changes in the minimum wage.

Since its introduction, considerable research has been undertaken in order to evaluate how the minimum wage in the UK has affected employment and inequality. For example, using a difference-in-difference estimator based on workers' position in the wage distribution, Stewart (2004) showed that the UK law had no adverse employment effects for low-wage workers. These results were found to be robust across demographic groups, suggesting that even the employment rate of young workers was not affected by the introduction of the minimum wage. Other studies by Machin et al (2004) and Stewart (2008) point to an adjustment along the intensive rather than the extensive margin of employment: i.e. the introduction of the minimum wage was accompanied by a reduction in hours worked by low-wage workers. This suggests that, in aggregate, the income effect following the introduction of a minimum wage may be at least partly offset by a reduction in working hours for low-wage workers.

Manning (2013) mentions a number of important differences between the minimum wage introduced in the UK and that proposed by the German government, which should be kept in mind. A key difference is that the UK legislation stipulated a lower minimum wage for young workers in order not to harm the employment prospects of young people entering the labour market with little, or no work experience. Another important difference is the level at which the minimum wage is set: in the UK, it corresponded to 46% of the median wage, while the German government's proposal of €8.50 per hour equals 58% of the median wage (in current prices). Thus, while the introduction of the minimum wage was expected to directly affect only 8% of adult workers in the UK, the German proposal is likely to affect a significantly larger share of the population (15% according to DIW Berlin). 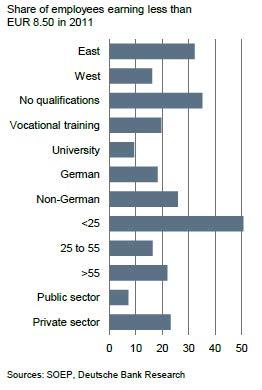 While most studies suggest that the risks of increased unemployment following the introduction of a minimum wage are small, it is likely to induce other types of macroeconomic adjustment. Conceptually speaking, a rise in the wage-bill of firms - insofar as it doesn't affect employment - should either translate into reduced firm profitability or be passed-through to consumers through higher prices. Again, the UK experience provides useful insights in this regard. A study by Draca et al (2011) finds that the introduction of the minimum wage led to significantly reduced firm profitability, especially for firms with high market power. What is more, this reduced profitability did not lead to an increase in firm exit rates, although suggestive evidence points to a reduction in firm entry rates in the long-run. In addition to its effect on firm profitability, existing research also indicates that the minimum wage also affected consumer prices. Using sectorial-level price data, Wadsworth (2010) finds no evidence of significant price changes in the UK in the months immediately following the introduction (and subsequent increases) of the national minimum wage. However, when considering a longer time-horizon, he finds that prices in sectors with an important share of minimum wage workers have risen significantly faster than prices in other sectors.

Thus, while a minimum wage may not significantly damage the employment prospects of low-skilled workers, historical experience suggests that the increase in wages is likely to be partly offset by an increase in consumer prices. In the context of the broader debate concerning macroeconomic adjustment in the Eurozone, some economists and policymakers have even deemed wage growth and higher inflation in Germany to be desirable. For example, in an interview with Suddeutsche Zeitung in April 2013, EU Social Affairs commissioner Laszlo Andor argued that Germany should introduce a minimum wage in order to increase internal demand, thereby reducing the country's current account surplus. This argument has been fiercely criticised by a number of economists in Germany, including Hans Werner Sinn, who argue that wage inflation will damage German competitiveness.

Unfortunately, this debate has suffered from the absence of reliable empirical evidence. No studies have been carried out examining the effect of the minimum wage on UK competitiveness over the past decade. Moreover, research studying how the minimum wage affected the wage growth of workers located in higher quintiles of the wage distribution has yielded contradictory results: while Butcher et al (2012) find evidence of positive spill-over effects, Stewart (2012) finds no such evidence. It follows that the UK's recent experience gives little indication as to how the minimum wage will affect aggregate demand and competitiveness in Germany.

Reducing inequality in Germany: Can the minimum wage help?

In addition to its potential consequences for employment and prices, the minimum wage is also expected to have important distributional implications. Indeed, one of the key factors responsible for the emerging political consensus in support of a German minimum wage stems from concerns about the increasing number of low-wage workers and the associated rise in income inequality. Many studies, including a recent paper by Schmid and Stein (2013), have attributed this rise in inequality to three main factors: (i) cyclical and structural changes in the labour market; (ii) the increasing importance of capital income relative to labour income; and (iii) a reduction in the effectiveness of income redistribution mechanisms.

There remains considerable scepticism in Germany about the effectiveness of the minimum wage to tackle such rising inequality. A recent report by the DIW Berlin claims that since most low-wage workers are supplementing the income of another household member, an increase in combined household earnings will be offset by higher taxes. That being said, the UK experience paints a more optimistic picture of the expected effects of minimum wage legislation on inequality. Dolton et al (2012) and Butcher et al (2012), for example, find that the introduction of a national minimum wage explains a considerable part of the reduction in inequality at the bottom half of the wage distribution. However, as these effects tend to be small in magnitude and concern only a small fraction of the labour force, most economists agree that minimum wage laws in isolation are an unsatisfactory policy tool to address rising income inequality.

On the whole, the UK's experience provides some valuable insights about what we should expect from the introduction of a national minimum wage in Germany. In particular, it suggests that an appropriately designed law (allowing perhaps for variation based on age, or some regional variation to control for different economic conditions in former West and East Germany) will have negligible effects on the level of employment. In addition, absent any significant negative employment effects, the increased income for low-wage workers can help reduce inequality, especially in the lower quantiles of the wage distribution. Several commentators, especially outside Germany, have also mentioned that the minimum wage will help increase internal demand, thereby facilitating macroeconomic adjustment in the Eurozone through a reduction in Germany's current account surplus. Critics in Germany, on the other hand, have pointed to potential costs in terms of lost competitiveness. However, it is difficult to assess the validity or relevance of either of these two views given the current lack of rigorous empirical research studying this issue.

Butcher, Tim, Richard Dickens, and Alan Manning. "Minimum wages and wage inequality: some theory and an application to the UK." (2012).

A key component of the coalition agreement between the CDU/CSU and SPD signed on November 27 is the adoption of a minimum wage for Germany. Under the agreement, a statutory minimum wage of €8.50 per hour will be introduced across the country starting in 2017. Pushed as a make-or-break issue by the SPD during the negotiations, its introductionfollows months of heated debate about its desirability and potential consequences. Although economists have yet to reach a consensus on the issue, the recent experience of the UK provides some valuable insights about what we should expect from the introduction of a minimum wage in Germany.