Focusing on regulatory challenges in digital markets, in particular the rise of corporate power, the fourth annual Conference and Policy Forum of the Berlin Centre for Consumer Policies (BCCP) was held in Berlin on June 21st, 2019.

Touching upon an issue at the forefront of current European and US policy debates, more than 100 participants, including academics from law and economics, policy makers, professionals, BCCP Fellows, and the interested public came together at the Wissenschaftszentrum Berlin für Sozialforschung (WZB). A remarkable body of economic research reports on the global rise of concentration and mark-ups across many markets and industries. The measurement of market power, the role of competition policy, and the potential need for regulatory intervention have moved into the spotlight, becoming core issues in current academic and policy discussions.

The conference panellists and participants discussed the road ahead for improving institutions and markets to curb corporate power for the good of society.

In the opening session, Jan Eeckhout (Universitat Pompeu Fabra Barcelona), Jonathan Baker (American University), and Fiona Scott Morton (Yale University) discussed the global rise of concentration, profits, mark-ups and market power across many markets and industries, the possible explanations for rising mark-ups and concentration and the role of competition policy enforcement in protecting consumers from monopoly and market power. Jan Eeckhout argued that increasing market power results from combined changes in market structure and technology and can help explain secular macro trends such as wage stagnation, the decline in the labor share, the decline in business dynamism, and the reallocation of sales towards high mark-up superstar firms. Jonathan Baker added that an additional explanation for growing market power is also relaxed antitrust enforcement especially towards exclusionary conduct as well as courts’ use of erroneous economic evidence. Especially in the digital economy, big data can be used as a tool for perfect price discrimination or as a barrier to entry. Fiona Scott Morton emphasized the role of market entry as one of the most effective policy tools to foster competition. Restoring competition must be the goal of any remedy imposed by antitrust agencies. Especially in the digital economy, rather than fines and divestitures, mandatory data interoperability could be a powerful tool to enable market entry. The three talks were followed by a vivid discussion moderated by Tomaso Duso (DIW Berlin and Technische Universität Berlin) on the role and goals of competition policy. The panellists agreed that the issue was not the lack of laws and tools but the lack of enforcement. 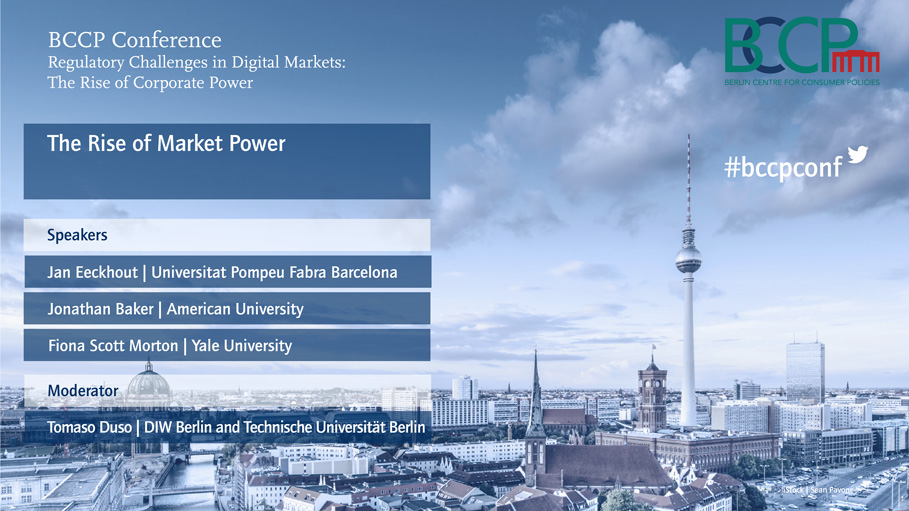 In the first afternoon session, Matthew Gentzkow (Stanford University) and Helen Margetts (University of Oxford) presented their research on the political consequences of corporate power in digital markets. The panellists agreed that neither the size nor the power of platforms such as Facebook is a problem per se. Matthew Gentzkow’s research showed that segregation of content exposure across political camps online was similar as on traditional media and lower than in social context. However, this changed on social media platforms due to social filters, lower emphasis on sources and more exposure to niche content. Even though the structure of the personal social networks on social media platforms like Facebook leads to better-informed users in the first place, socially filtered content leads to stronger political polarization. Helen Margetts emphasized that while social media has increased political engagement, it has also led to larger political volatility. An institutional catch-up is needed to stabilize democracy. In the following discussion moderated by Daniela Stockmann (Hertie School of Governance), political segregation as one feature of social networks and the role of public pressure and data transparency to push changes were highlighted.

Helen Margetts
Professor of Society and the Internet, University of Oxford 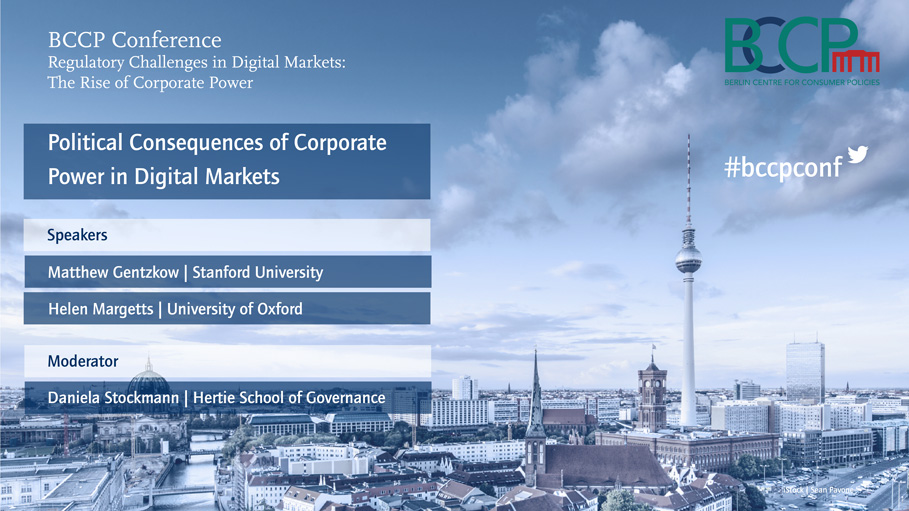 In the closing policy roundtable about Consumer and Competition Policy in Times of Rising Corporate Power, panelists Amelia Fletcher (University of East Anglia and Centre for Competition Policy), Marit Hansen (State of Schleswig-Holstein), Stefan Hunt (UK Competition and Markets Authority), Paul Nemitz (European Commission), and moderator Hans Friederiszick (E.CA Economics) engaged in a lively discussion about the areas in which intervention by regulators could counter the rise of corporate power and political polarization. Especially for online platforms, the (future) relevance of implementing data protection by default and design, as specified in the General Data Protection Regulation (GDPR), and of the development of rules for increased data mobility, were stressed. 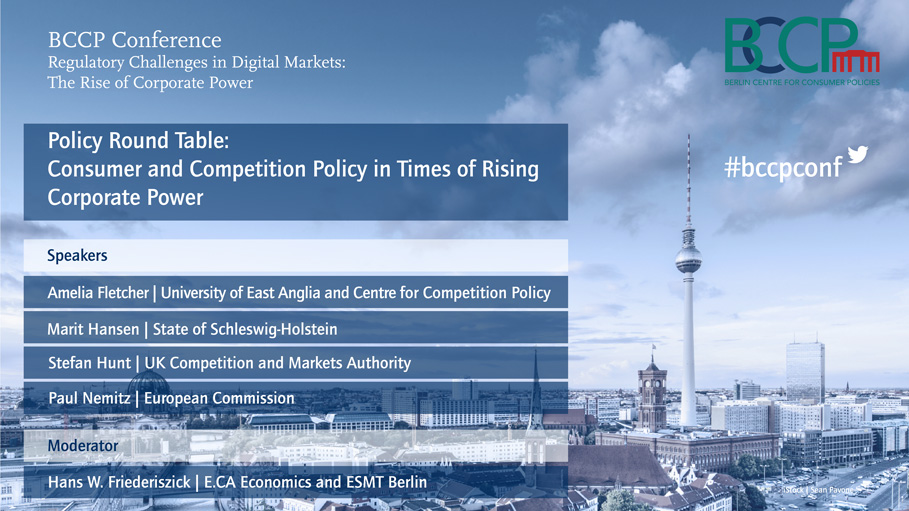 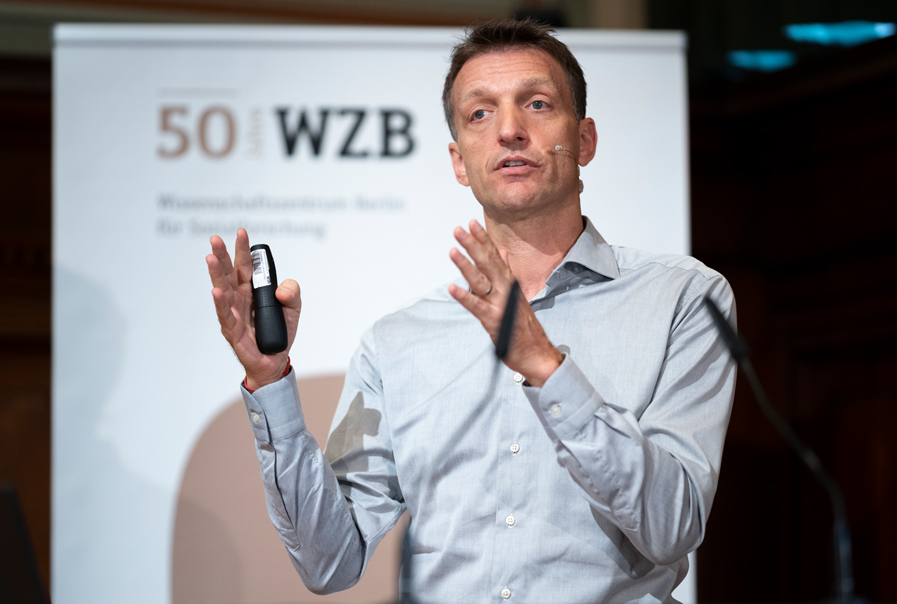 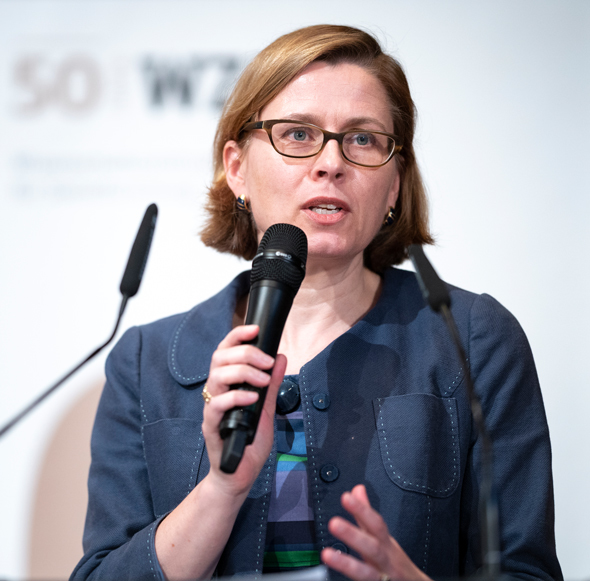 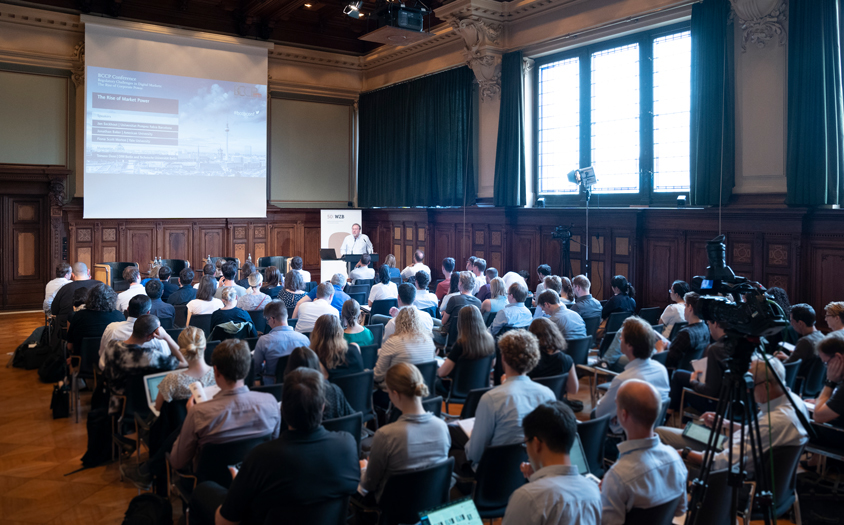 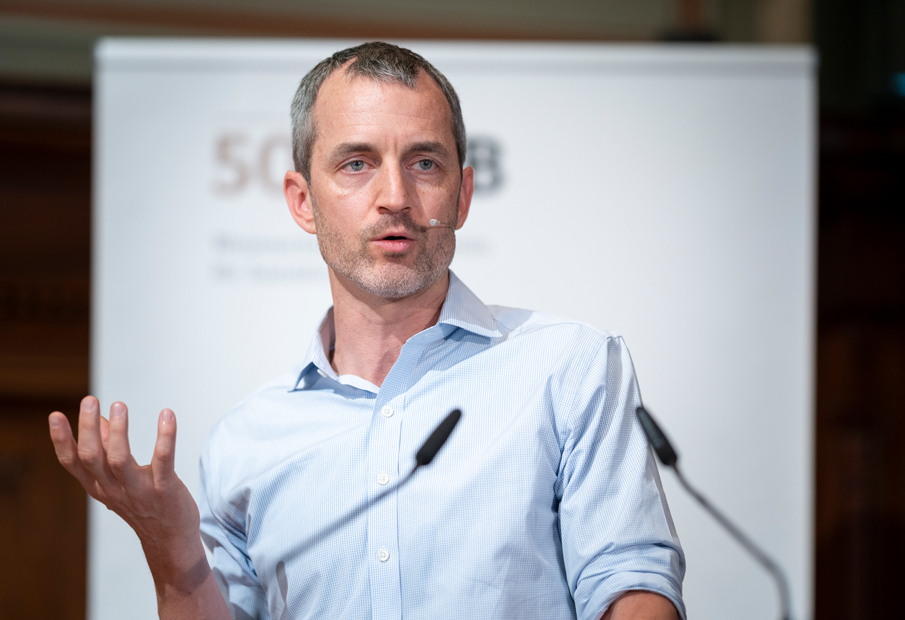 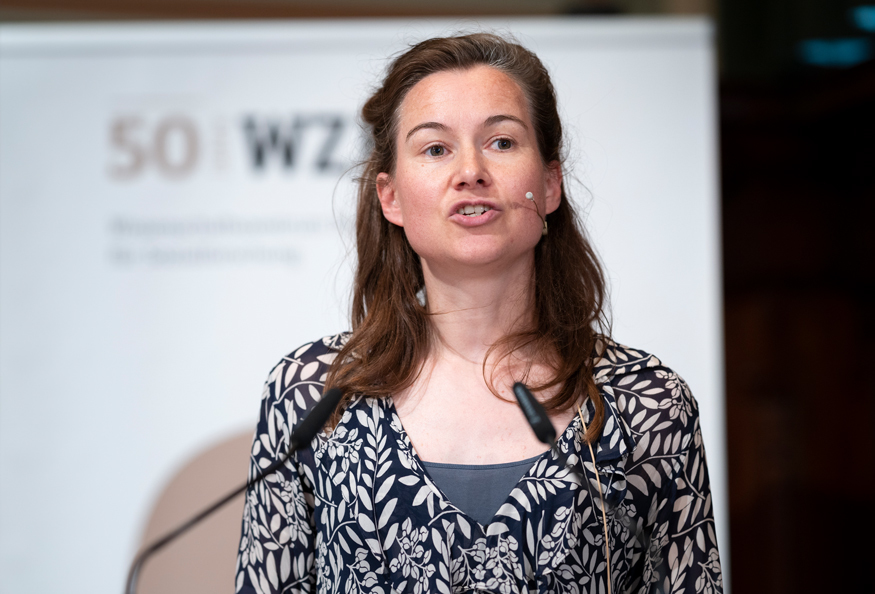 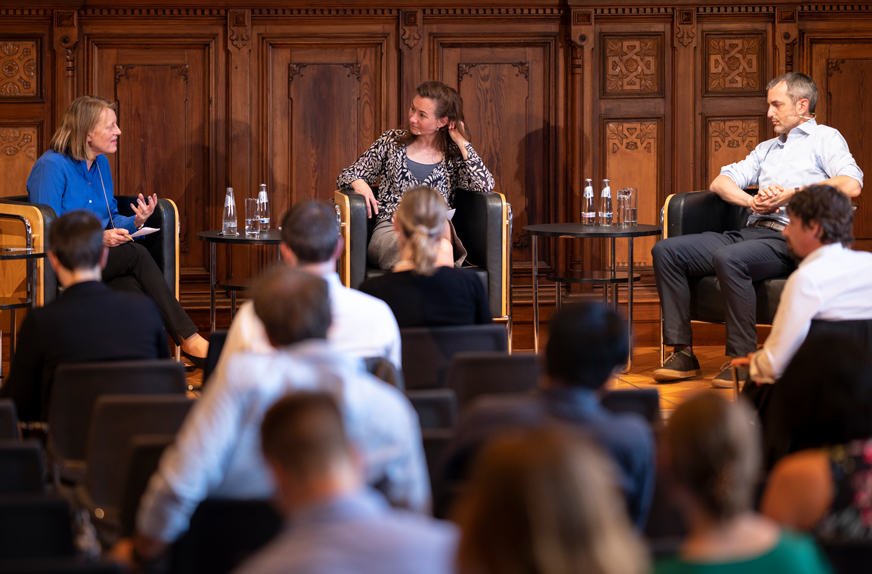