Do bad management practices cause a fall in overall production? Can that effect be observed worldwide? How does one even observe it at all? These are just a few of the questions addressed at DIW Berlin’s Lunchtime Meeting on June 18th 2008 with Dr. Christos Genakos. Dr. Genakos, Lecutrer, Fellow, and Director of Studies in Economics at Selwyn College, Cambridge University, presented research that sheds light on management practices across the globe to an audience gathered at DIW Berlin. 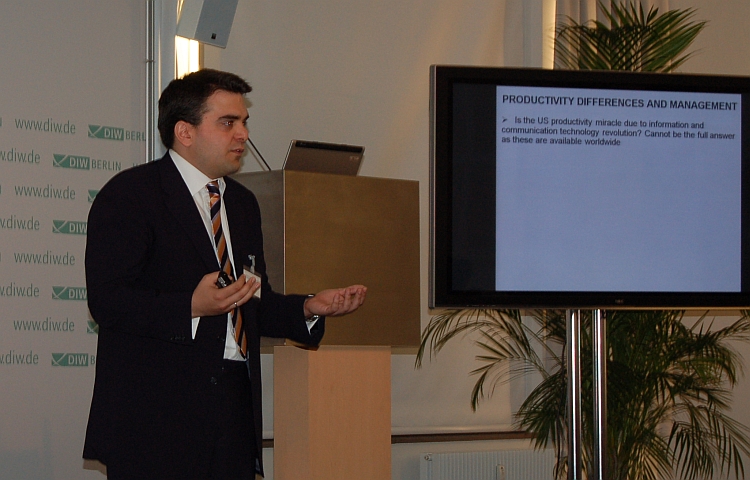 Dr. Ray Cunningham, Director of the Anglo-German Foundation, introduced Dr. Genakos and provided a background for the project. The Anglo-German Foundation, whose mission is to, “Increase mutual understanding of the social and economic systems of Germany and Great Britain”, played a large role in the funding and development of the management project as part of their current major research initiative, “Creating Sustainable Grown in Europe”. The initiative aims to address the difficult issue of creating and maintaining growth in Europe while simultaneously protecting social and environmental systems. Also on hand were Thomas Hanke, editor of editorials for Handelsblatt and Dr. Georg Meran, vice-president of DIW Berlin.

Dr. Genakos began his presentation explaining how the research project was born out of a desire to understand productivity differences across the globe.  Even after controlling for a wide-variety of conditions when examining productivity, there was still a left over economic “residual”. Better understanding this “black box” of management was the primary focus of the study. A partnership with McKinsey helped with collecting the data and identifying target firms. The experiment broke down management practices into three areas; operational, people, and performance and an 18 topic survey was developed to address these target areas.  Interviews were conducted with plant managers, as they were close enough to the actual manufacturing process while at the same time connected to corporate policy. All interviews conducted were double-blind and answers were scored on a scale of one to five.  For example, a firm whose managers meet daily with employees, record met goals, and communicate results to all employees would receive a score of five for the question “How is performance tracked?”

After collecting the results from over 4,000 mostly medium sized firms, the data was internally and externally validated. The results showed that good management and strong sales had a positive and significant correlation across the board. Country performance fell into three main tiers; at the top was the U.S. followed by Germany, Sweden and Japan, France and the U.K. were in the middle, and India, China and Greece fell in the bottom tier. However, each country had strengths and weaknesses; while the U.S. was strongest in people management it fell behind Sweden and Germany in operations management. Managers across the globe, especially in Greece, over-estimated their skill.  Competitive markets and free trade benefited productivity, while family-operated businesses, especially whose CEO was chosen because they were the eldest son, were more poorly managed. Labor market regulation is also negatively correlated with productivity.

Discussion, moderated by Dr. Cunningham, began with Thomas Hanke addressing a wide number of topics including the use of only manufacturing firms in the survey, the difference between correlation and causation, and specific concerns about accounting for cultural differences, citing the German practice of “Familienunternehmen”. In response, Dr. Genakos explained that moving forward with the project, they will begin to address many of these concerns including working with service organizations and more closely examining the root cause of the results, however since this is really the first experiment, looking into the “black box” has left them with almost more questions than answers. Dr. Cunningham closed the meeting by citing the difficulty of creating sustainable growth, but through further research like the management project, the Anglo-German Foundation hopes to do just that.